New beginnings - What about the cost of education? 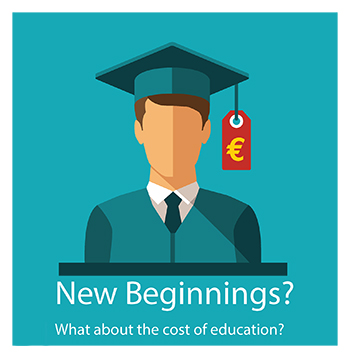 What happens during our youth has a major influence on how we live the rest of our lives. For some, this time may mean access to an education and all the exciting opportunities that arise from this, without the worry of the costs involved. One way to stop the persistent cycle of poverty is to educate all our citizens in a fair and just manner. However, not everyone benefits equally from our education system. Recent statistics demonstrate this class divide. More than 90% of students are reported to progress to higher education in affluent areas, compared to as few as 16% in poor districts. When SVP members visit individuals and families all over the country they hear of the persistent barriers put in their way preventing them to break the cycle of poverty. The cost of education continues to rise, preventing many from enjoying its benefits.

Ireland’s education system is described as free, but a literal interpretation would mean sending a child to school with no uniform, no books, no food and no stationery. The latest report on voluntary contributions published in the Irish Times shows that 55% of schools are requesting ‘voluntary contributions’ from parents. That is over half our schools. SVP members regularly report the stress parents feel when a letter comes home requesting money.

Transition years costs have become a major source of stress for parents in recent years according to SVP members. Costs vary from school to school with the average during this year being €300. A study of the transition year programme in 2013 shows almost 25 years on from its introduction, better off students are up to twice as likely to have the opportunity to do the post junior cert programme. This study raises questions about equity in education because transition year students do better in the Leaving Cert, while it is also seen as important for social and personal development. SVP recommends that the cost of Transition Year be made clear to all students and parents at the beginning of the academic year. Students should also have a choice in which trips/excursions they avail of which would go some way in reducing the overall cost.

Despite the increase in the Back to School Clothing and Footwear Allowance in June 2017 and the circular from the Department of Education and Skills on reducing school costs ‘voluntary’ contributions continue to be a reality for parents. The Department need to address this issue as a matter of urgency. Adequate funding needs to be put in to primary and secondary education so that ‘free’ education really does mean free without any extra costs. This begins by restoring the capitation grant rates to 2010 levels.

At third level a recent report found that about 36% of the total population say they are experiencing ‘severe financial problems’ with the problem at its most severe among older students. The increase in the student contribution to €3,000 and cuts to the maintenance grant have put additional financial hardship on students and also hindered those on low incomes accessing third level education. Many students’ SVP support are disadvantaged students who have additional financial commitments such as housing and childcare. Little has been done for this cohort of students in successive budgets. For example, the Cassels report recommended that SUSI be extended to those wishing to study part time.  This would be of immense benefit to second chance learners both on a financial and flexibility basis.

A new beginning for SVP members and the families they assist would be a society where everyone can benefit from an education that is accessible, fair, transformative and enjoyable. One method to ensure this  is a reality for the families SVP members visit is to reduce the cost in receiving an education at all levels of Irish society.