A reflection at the South-East Galway/Tuam Gathering in Mountbellew 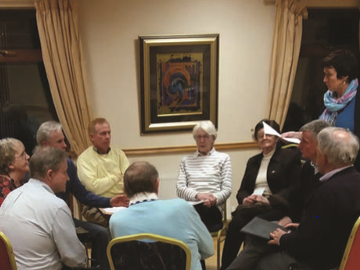 Frederic Ozanam, is he forgotten?

Well, sometimes, yet he’s the reason we’re here tonight on this very special occasion in Mountbellew.

As the poet, Robert Frost would say that Frederic ‘took the path less travelled’ and that made all the difference. His Christian faith was his inspiration as he strove for a Gospel-based social justice for a fair and just society.

This idea of faith went against the culture of the day and that isolated him from the so-called, thinking, reasoning people of the day. Frederic had a vision. The fact that he was very bright and got a formal education isolated him further and this time from his own class.

Frederic was ready to break the mould. He recognized that the poor were poor and didn’t belong, and the sick were outcasts as well. Frederic used language that was foreign to the time. He used the words such as helping, caring and embracing. He talked about compassion and understanding. This was hard for many to take. Was he out of his mind?

But when he said that compassion and understanding must be followed by action the clouds burst but Frederic wasn’t ruffled. There was no lámh láidir, no iron fist but a nudging and a gradual reasoning and St. Vincent de Paul Society is where it is today, in a good position. Maybe it could be better but it’s still very good.

Much of Frederic’s characteristics and aspirations have already been mentioned here tonight like respect, dignity, non-judgmental, non-discriminatory and being a voice for the voiceless. And the perennial question arises: ‘If I was in great need and in his/ her shoes, how would I like to be treated?’ We can’t afford a stray error no matter how busy or fatigued we are. We try to use a gentle tone of voice and never let a rash or uncourteous word enter our dialogue with a needy person or people, who may be in a very vulnerable position, whether on visitation or elsewhere. And if an unintentional note of disharmony creeps in, Frederic says that we should be the ones to turn the other cheek first.

To conclude with another of Frederic’s aspirations, ‘Let us love and serve one another now and forever, far and near, in our own conference, from one conference to another, from town to town and from country to country.’ This is what inspired the Society to embark on the Twinning Projects with other countries some decades ago. Frederic Ozanam is not forgotten.