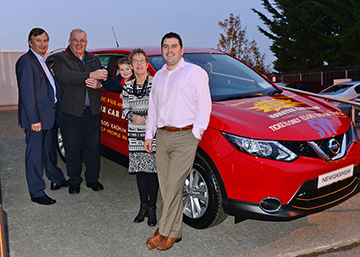 This draw provides an excellent opportunity for participants to donate to SVP allowing us continue the good work of assisting those most in need.

Mairead Mc Guinness MEP assisted the Society by pulling the winning ticket.  A supporter of the Society, Mairead spoke of the great work of SVP members and volunteers in communities around the country and in particular in the North East & Midlands Region in tackling poverty and fighting injustice.

“I was delighted to assist to the Society and welcomed the opportunity to join with all of the volunteers and dedicated members along with Mayor of Drogheda, Cllr. Paul Bell in drawing the winning ticket.

“I wish the Society well in the upcoming Christmas Annual Appeal and of course, let me also congratulate the prize winners and wish them well with their good luck in winning and thank them for supporting the Society.

This year Cyril Begley, Kinnegad Co. Westmeath was drawn as first prize and is the proud winner of a 2015 Nissan Qashqai.


Cllr Paul Bell, Mayor of Drogheda was also there on-hand to assist by pulling the second winner.  The Mayor spoke of the passion of volunteers in the greater Drogheda area knowing the effect SVP is having locally especially in the run up to Christmas.

SVP North East & Midlands Region would like to thank everyone for again making St. Vincent de Paul your charity of choice.