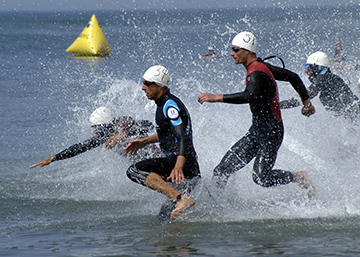 Local Cobh father of three, Norman Allen is volunteering to enter the Iron Man Wales gruelling challenge on the 14th September in aid of the SVP in Cork!

Norman, now in his fifties has been competing in various triathlons since 2010 - mostly sprints and some longer distance. He is a member of Cobh Triathlon Club and has been working in marine equipment sales since 2001 having spent 21 years in the Naval Service.

Norman remarked “I choose SVP as I have witnessed the SVP active in the community in North side Dublin where I grew up and also in the community in Cobh.” Norman has set up a Fundraising Page on mycharity.ie to raise much needed funds for the SVP in Cork.

The Ironman Wales competition in Tenby is his first Ironman challenge.

According to Norman, the Ironman distance Triathlon would be the longest of the triathlons and it is held in various locations throughout the world.

Norman also mentioned, “Just to give some comparisons - a sprint triathlon could take on average 1 hr 25 mins but an Ironman takes on average - 13hrs. The Ironman takes in a 3.8Km swim, a 180Km cycle and a 26mile marathon run to finish.”

Pembrokeshire in Wales is the host county for IRONMAN Wales and is famous for its coastline. The race has quickly gained a reputation with a challenging bike and run courses, but also for the enthusiasm of the local residents in hosting the event.

The Society wishes to sincerely thank Norman and wish him the very best during this big adventure.

If you too would like to become an Event Volunteer with the SVP in Cork please contact Yvonne at 021 4943542 or email Yvonne@svpcork.ie.