‘Planet Jedward’ in the shape of pop duo John and Edward, landed in Belfast today (20 November) to launch the 2017 Family Appeal, one of Northern Ireland’s largest and longest running Christmas present appeals. 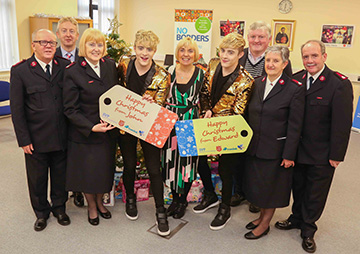 The Salvation Army and St Vincent de Paul have teamed up once more to bring festive cheer to thousands of local underprivileged children and families.  The appeal has received an additional boost this year with the announcement that Translink has come on board as a supporter and will be placing collection bins in six of its busiest bus and rail stations.  U105 will also be encouraging listeners to help ‘Stuff a Bus’.  Translink and U105 are aiming to c0ollect at least 10,000 gifts during the appeal which will run from 20 November to 19 December.

Last year, the Appeal, (now in its 38th year), distributed 50,000 gifts to children across Northern Ireland – all of which was made possible by the generosity of local people and businesses.

Major Paul Kingscott, the Salvation Army’s divisional leader, said: “As a church and charity, we are inspired by the Christmas message to reach out to people in need.  The Family Appeal allows us to help thousands of children and young people in Northern Ireland.

“Our team of volunteers will be working around the clock to make sure the generous gifts we receive go to families who might otherwise go without.  It’s a special campaign and this year we’re delighted to have the support of Translink, U105 and Jedward.”

Speaking at the launch, Sean O’Neill, Family Appeal Co-ordinator for St Vincent de Paul, said: “Since we’ve been involved in the Family Appeal we have seen it go from strength to strength and are hopeful that 2017 we will see a record number of gifts being donated.  We’re delighted that Translink and U105 have joined us in our efforts to make sure every child’s Christmas is special.

“We never cease to be humbled by the overwhelming kindness and generosity of the ever-giving people and businesses of Northern Ireland.  Poverty is a very real issue in our society today, particularly hidden poverty where outwardly, families appear to be coping but behind closed doors the reality is one of food banks, cold houses and approaches to charities such as ourselves and the Salvation Army for help, support and guidance. 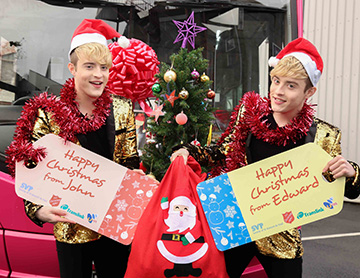 “Any gift, no matter how small, will make such a difference to a child’s Christmas and we would like to thank both the public and the businesses who donate to the appeal each year and especially to the companies which act as drop-off points which this year will include six Translink bus and train stations.”

Confirming its support for the 2017 Appeal, Lynda Shannon, Communications Manager at Translink, said:  “We have long admired the great work carried out by the Salvation Army and St Vincent de Paul which is why we are delighted to launch the Stuff A Bus Toy Appeal in partnership with U105.  We are confident our staff, customers and general public will help us go the extra mile for families in need.

“Keep an eye out for toy drop-off points in six stations across the country including Belfast Central Station and Europa Bus Centre, Bangor, Newry, Dungannon and Derry~Londonderry.  If you’re out and about doing your Christmas shopping, just one extra present could make a difference to a child’s life on Christmas morning.”

Gift donations for children aged from newborn to 16 years can be made at all Salvation Army halls and shops and all SVP offices and Vincent’s shops or wherever people see the publicity poster.  Gifts can also be left in Translink bus/train stations at Belfast Central, Belfast  Europa, Newry, Bangor, Foyle Street Derry~Londonderry and Dungannon.  All gifts must be new and unwrapped, and the appeal would especially welcome donations for older boys and girls such as gift vouchers, board games, selection boxes, and toiletries.

For more information go to www.salvationarmy.org.uk/familyappeal or visit www.translink.co.uk/stuffabus/ or join in the conversation online using #StuffABusNI.