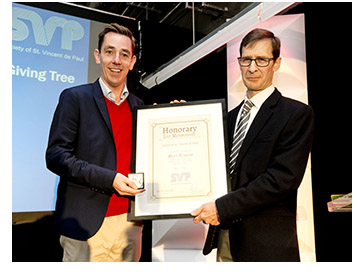 For many years Mr. Tubridy has given his time to the SVP Annual Appeal highlighting the fact that Christmas is not the same for everyone.

Speaking at the launch Mr. Tubridy said “I always wonder every year if it’s going to get better, is there something nicer to say, but this year is nearly the most important year for me to be here because there are nearly 3,000 children homeless.” He had a special message for those children when told them that they would not be forgotten.

"That’s why I’m here, to say to all those children watching the Toy Show - they have to know that we are having fun but we are thinking of them and they are not forgotten. We hear you, we love you."

Mr Tubridy is the first honouree of the SVP Lifetime Membership Award.
Share on: