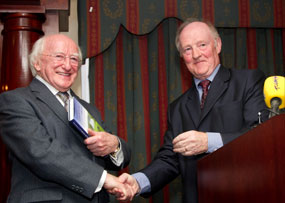 At the launch of the second phase of President Michael D. Higgins Ethics Initiative, hosted by The Society of Saint Vincent de Paul, SVP's National President Geoff Meagher presented President Higgins with a copy of a new SVP Book '170 years of fighting poverty in Ireland' and expressed the Society's willingness to engage with the Presidents initiative, which aims to act as an opportunity for critical and fresh thinking, and contribute to harnessing and supporting the “profusion of positive initiatives that exist in Irish society.”

In launching the initiative President Higgins praised The Society of Saint Vincent de Paul for its ability to combine both charity and social justice “it seems to me that Saint Vincent de Paul is an organisation that has the ability to traverse all the critical ground between both ends of the spectrum, by combining the spirit of charity with the pursuit of social justice” He said.

He went on to say “All of us Irish people should be grateful for the quiet, sustained weekly work of the Saint Vincent de Paul Society’s volunteers. But we must also be challenged by their actions, rooted as they are in the conviction that the struggles of the marginalised are the struggles of society in general.”

President Higgins invited the Society and wider civil society to use this as opportunity to voice the values that they wish to see placed at the heart of our collective future and to compel our elected representatives to listen to the voices of the most vulnerable in Irish society.