SVP’s work in communities across the country demonstrates that energy poverty remains a major issue affecting large volumes of households, estimated at up to 28% of the population. Every week, SVP members meet hundreds of individuals and families living in cold, damp and poorly insulated homes, struggling to meet the costs of their utility bill. In 2017, fuel and utilities represented 14.5% of overall expenditure on direct assistance to households. 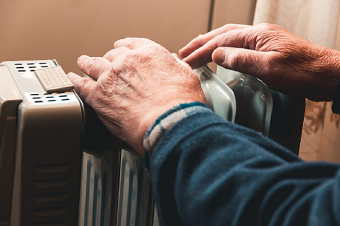 There are six of us with two bedrooms, living room, kitchen and bathroom. We have one small heater, and we move it from room to room. (VPSJ/SVP 2018 Stories of Struggle)

Although energy poverty remains a significant issue for SVP, there has been a lot of progress concerning this issue over the past number of years. Better engagement from suppliers and the introduction of pre-pay meters has led to a significant reduction in the number of disconnections. This has been coupled with a much greater investment in energy efficiency schemes for low-income households.

However, significant challenges remain. In the past 12 months, most suppliers have increased their prices, adding at least €300 per year to the average bill. Gaps in energy efficiency schemes are also limiting progress on tackling energy poverty. For example, private renters are much more likely to live in poorly insulated homes, but it is very difficult to access grants for energy upgrades as they are only currently available to homeowners. Although the fuel allowance has increased in the past two budgets, it is still 21% lower than in 2010 once you take into account recent price increases.

Another factor that could potentially make the experiences of the people SVP assist much more difficult is an increase in the carbon tax. Research has shown that an increase in the carbon tax, as it is currently designed, would hit low-income households harder, particularly those living in rural areas.  A significant increase in the tax could potentially add  €10.50 to a bag of coal, €2.25 on a bale of briquettes, and 26.5 cents on a litre of diesel.  And unless there is greater investment in public transport and energy efficiency schemes, low-income households will have to absorb these costs as they are unable to afford the switch to climate-friendly alternatives.

I can’t afford to fill the oil tank; I can fill a barrel with kerosene from time to time, or get fifty euro of briquettes or coal. It’s a big home, but very cold and [my daughter] is asthmatic. (VPSJ/SVP 2018 Stories of Struggle)

While the impact of a carbon tax on poor households here in Ireland is of concern, we also know that poorer communities across the globe are more likely to experience the effects of climate change such as flooding and drought. The injustice of this is all the more apparent once you consider that the wealthiest 10% of the world's population are responsible for 50% of global emissions. Climate change is one of the most pressing issues of this generation, and significant efforts are required from Governments across the world to avoid environmental catastrophe.

At present Ireland is one of the worst performers in reducing carbon emissions and if we don’t meet our climate action commitments we face fines of up to €500 million. It is therefore imperative that SVP are part of the climate change discussions at local and national level so that measures are put in place to adequately protects low-income households from the costs of climate action.

Practically, this means ensuring low-income groups, regardless of tenure, can live in energy efficient homes, providing better access public transport in both rural and urban areas and putting in place protections from future energy price hikes through the introduction of social tariffs. In the short, to medium term, it will be crucially important that energy-poor households are compensated from any increases in the cost of fuel, as a result of carbon pricing, through the tax and benefit system.

It is clear that if Ireland is to be successful in addressing both climate change and energy poverty, the Government need to see both issues as being on two sides of the same coin and, critically, of equal importance. That’s why the principles of climate justice, such as safeguarding the rights of the most vulnerable and sharing the burdens and benefits of climate change equitably, must underpin all policy decisions.