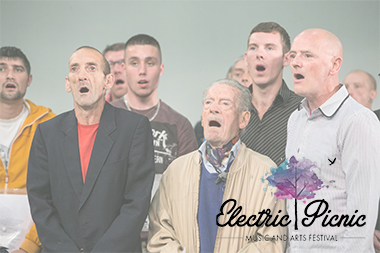 The 60-strong High Hopes Choir, which began as the subject of an RTÉ documentary, is set to take pride of place at the Electric Picnic Trailer Park.

With a set list that includes a mix of favourites from Coldplay, Snow Patrol, Cyndi Lauper and Kodaline, to a few oldies thrown in such as Bill Withers’ Lean On Me and Jackie Wilson’s Higher and Higher, this is one performance that promises to take Picnickers higher and higher!

The choir was the subject of a three part documentary called High Hopes which aired on RTÉ television in December 2014. It was based on the lives of people touched by homelessness in both Dublin and Waterford. The two choirs were created by former principal conductor of the RTÉ Concert Orchestra, David Brophy.

The result, according to David, saw the singers ‘reach beyond the stars’ recording a version of Kodaline’s High Hopes with the RTÉ Concert Orchestra which they performed live on The Late Late Show, and which reached  #1 in the charts. They received vocal advice from chart-topper Ed Sheeran, former Westlife star Shane Filan and The Voice of Ireland’s coach Bressie,  and performed with Lisa Hannigan, Brian Kennedy and the RTÉ Concert Orchestra at a charity gala concert in Christchurch Cathedral, Dublin.

The choir has been a fantastic achievement for everyone involved; a year after it started the choir is still going strong with every single member contributing to its success. They have set-up their own committee and are in-undated with requests to perform, with eighteen events booked this year already.

There are exciting times ahead for the choir with a few big announcements coming soon. So far this year the Choir has played a concert in Waterford, partnered with the award winning Airtricity Airs choir for a concert in Dublin, and received an invite to play for the president in Áras an Uachtaráin.

None of this could be possible without all members giving up their time to volunteer 1000s of hours to raise awareness of homelessness and change the public perception of what it means to be homeless in Ireland today, as well as raising funds to support the services and facilities which play a vital part in ending the cycle of homelessness.

If they can sing a story to someone who responds with empathy and understanding then silence, stigma, and judgment cannot survive.