The Salvation Army and SVP Celebrate Most Successful Family Appeal Ever 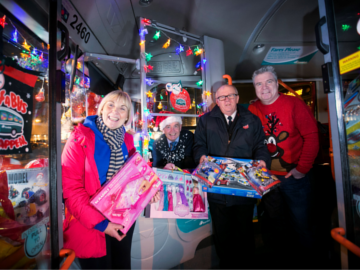 The Salvation Army and St Vincent de Paul in Northern Ireland (SVP) are celebrating the most successful Family Appeal ever with more 11,000 children receiving a gift to open on Christmas Day 2017, something their families who are under severe financial pressure may not have been able to provide for them otherwise. In total, as part of the Family Appeal 2017 more than 50,000 gifts were distributed to families in need locally.

Thanks to the Stuff a Bus initiative with Translink and U105, who joined as supporting partners for the 2017 Family Appeal, more than 1,000 gifts were collected than in previous years. Additionally, the aim of stuffing one bus with 10,000 gifts was more than surpassed with two full Translink buses jam-packed full of presents delivered to SVP and Salvation Army to hand out families in poverty to ease the stress of the festive period.

The Family Appeal, which is organised in the run up to Christmas each year by The Salvation Army and St Vincent de Paul is well-supported by people right across the province.  Businesses, including Gordons Chemists, also regularly pledge support for the initiative and this year they opened up their stores as drop-off points for gifts.

Commenting on the overwhelming success of the 2017 Family Appeal, Sean O’Neill, Family Appeal Co-ordinator for St Vincent de Paul, said:  “We are extremely grateful to each and every person who took the time and spent the money to purchase something for children in need in our local communities this Christmas past. Our supporting partners, including Translink and U105, have spread the news of the appeal to new audiences which has brought many more people on board in support.  As a result we have handed out more gifts than ever before to even more families, which in itself is great news, however; sadly the need these families have is not only at Christmas as they are living in desperate circumstances all year long.”

Major Paul Kingscott, the Salvation Army’s divisional leader, said: “As a church and charity, we are inspired by the Christmas message to reach out to people in need but we would not be able to meet that need without the incredible support we receive from communities around Northern Ireland.  We are also grateful to the additional support this year from our partners Translink and U105."

Translink’s Ursula Henderson said: “A massive thank you to our customers and the public for making this the most successful family appeal ever.  Our ‘Stuff A Bus’ campaign in partnership with U105 was a great way to raise awareness for families in need across NI and provide the public with more opportunities to make their fantastic and extremely generous gift donations.”

The Family Appeal is one of the largest and longest running Christmas present appeals in Northern Ireland. It was established by The Salvation Army in 1980 and later expanded to include the Society of St Vincent de Paul. Each child receives one large gift, two smaller gifts, a board game, a book and/or a cuddly toy.