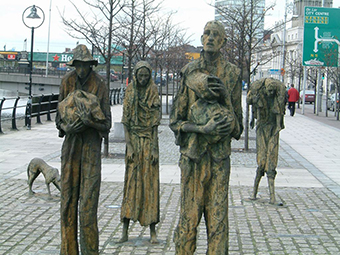 The first meeting to begin the process of establishing the Society in Ireland was held on 16 December 1844, at the White Cross Rooms, in Charles Street West, Dublin, close to the Four Courts.

Just 11 years earlier the Society had been established in Paris by Frederic Ozanam and five friends with the support of Sister Rosalie Rendu.

Since its foundation the Society has provided practical and emotional help to those most in need and at the same time driving the fight for social justice.

A striking feature of SVP since those first days is the way it has adapted to meet changing social and economic conditions created by famine, two world wars, civil war, internal strife, boom times and years of austerity.

In Cork in 1857 during the Great Famine the Society distributed over 67,000 loaves of bread and over 1,000 bundles of straw. During the First World War the Society distributed large amounts of cheese and flour sent by the people in Canada. In 1926 a coal strike in Britain resulted in a shortage of coal so in Ireland many Conferences purchased bogs and had the turf delivered to families.

As the Society continued to grow services such as shops, hostels, housing for the elderly, resource centres, and visitation services to hospital and prisons, were developed to meet the needs of those who sought its help. These services were in addition to home visitation, which remains the core work of the Society,

The Society’s campaigning for social justice was stepped up in 1978 when it published ‘Old and Alone’, a survey which found that 30% of older people had no flush toilets, hot water or hand basins in their homes. And more than one third never met anyone on a daily basis.

The recent years of austerity has brought perhaps one of the SVP’s biggest challenges in its history.  From 2006 until 2013 calls for assistance grew dramatically as did the cost of providing help with food, energy, education and basic living expenses.

But through those years, as in the century and a half before, the Society remained a beacon of hope for to thousand of Irish families.