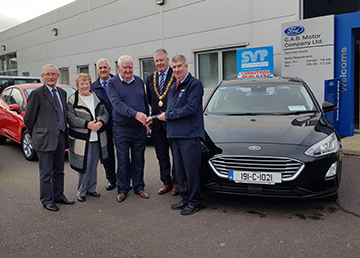 Following the completion of the Christmas Car Draw for the SouthWest Region, the keys of a brand new Ford Focus were presented to Michael and Angela O’Sullivan from Beara by Conor Cavanagh dealer principal in the presence of the Lord Mayor of Cork, Cllr. Mick Finn and  SVP Regional Vice President Paddy O Flynn.

The handover took place in the showrooms of CAB Motor Company the main sponsor of the draw. Speaking at the handover Paddy O’Flynn thanked the Lord Mayor for his presence and his ongoing support to the Society. He thanked CAB Motors who have sponsored a new Ford for the draw for the past six years.

He especially acknowledged the huge philanthropic contribution of Dr Tom Cavanagh and the Tomar Trust who have long been supporting the work of the Society and many other worthy causes over several decades.

Conor Cavanagh replied that he and the Cavanagh family were delighted to support the great work of the Society and reconfirmed their commitment to providing another new Ford for the next draw which will take place in late 2019.