Niamh and her daughters - A Hidden Homeless Story 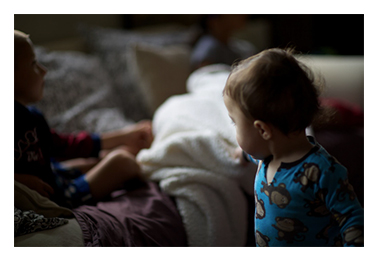 Niamh has two daughters aged 18 months and 3½ years. When her youngest daughter was three months old, Niamh had to leave the home she shared with her partner in the middle of the night as she was concerned for the welfare of herself and her daughters.

On first leaving her home, Niamh moved back in with her parents. She was reluctant to do so as her father recently had to leave work due to poor health and Niamh’s mother was financially supporting the household with one low paid job. Although Niamh contributed to household costs where possible, it was a constant concern and cause of stress that she and her children were putting undue pressure on her parents. After almost a year, she decided to leave.

When Society of St Vincent de Paul (SVP) met her, Niamh and her children were staying in a friend’s spare room. She knew this was only a temporary measure as her friend did not want to see them stuck. But Niamh and her daughters were living out of bags. There was no room for clothes or toys. At night, she found it hard to settle her youngest daughter. At that time Niamh was actively applying for jobs to help get back on her feet and managed to secure a part-time job in a crèche.

Niamh applied for social housing, but her application was refused. The Council suggested that Niamh declare herself homeless and gave her contact details of homeless shelters, but she dreaded the thought of her children having to stay there.

When Niamh contacted SVP she felt she had nowhere to turn. Determined to better their quality of life, Niamh applied for a course as a mature student. SVP was able to assist Niamh with her college costs and accompanied her to the Local Authority office to help her get on the housing list. SVP also linked Niamh in with domestic violence support services.

Niamh and her daughters are still without a suitable long term place to live.

The four NGOs are raising awareness of the lived experience of these individuals and families through sharing the real and personal stories of what it is like experiencing hidden homelessness. The group also identified a number of policy recommendations which would help prevent hidden homelessness, support those already living in hidden homelessness and reduce the number of people who have no choice but to turn to emergency accommodation.