30 years ago a Bailieborough charity known as Fred’s Fashions (now known as St. Anthony’s Conference ) held a fashion show, and it was decided that we would commemorate this event with another show to be held in the town. When the manager announced to the Conference meeting that we should hold one on the run up to Christmas, there was a variety of comments such as “It would be great to show the town exactly what we sell”. 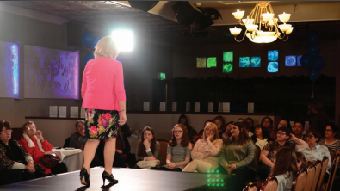 After a lengthy discussion the Conference agreed on the idea, it is then our troubles really began! I started by making out a timetable of events over the 9 weeks- lead-in period and then put up a notice asking for people to commit to a variety of jobs on the evening such as selling raffle tickets, manning the door to assisting the models. We then wrote to all the local business to enquire about sponsorship and hand delivered the letters with a call back by us 3 weeks later to see if the business could help us. We were amazed at the generosity of the local business’s in general.

We then set about doing it as professionally as possible and tendered for a stage company to provide the catwalk and lights, a DJ to play the music and an MC for the evening. The next job on the agenda was to find models so we coerced, cajoled and pleaded with staff and customers alike to model for us on the night. We eventually received commitments from five ladies and two very brave gentlemen comprised of customers, Tus and volunteers.

The night arrived and we were delighted that our National Retail Manager, Dermot McGilloway, and our representative on the Regional Retail Committee ,John Rooney joined us for the evening. After our initial introduction by our President Eilish McKenna, it was down to business. The fact that we had a great team of volunteers helping with the outfits and the professionalism of our MC, Peter Murtagh the night went off without a hitch.

Due to the generosity of our various sponsors and gifts for the raffle (22 prizes) we made an amazing €2,000. A great night was had by all and I would encourage other Conferences to consider it as we have seen a fantastic new set of customers shopping with us which has seen our weekly takings increase substantially. All it takes is good planning and buy in from all the staff volunteers and customers.