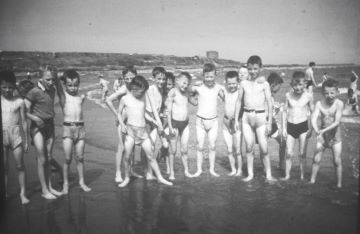 I remember the first time I ever left home to go away on holiday by myself. I didn’t know it was a holiday of course because nobody ever told me. I clearly remember one night in particular when the Da’ arrived home from work on his bike. He always seemed to get home at around six o’clock every evening and as soon as the Ma’ would hear the Angelus Bells ringing out from our local church she’d say “Your Daddy will be in any minute now, pour the tea”, and as sure as not he’d walk in the door pushing his bike through the kitchen and out to his shed. He cycled through hail, rain and snow to and from work every day. He worked in the Bank as a Porter and every year he would get a new suit made, paid for by the Bank of course, and a new woollen overcoat every three years.

The Ma’ and Da’ always sat at the head of our table and each of us, in accordance with our age, had their place, eldest near the top and youngest at the end. But of course, with me being in the middle I was always scrunched in between one brother and one sister. Now us middle ones never had a chair to sit on at the table, so we always had to stand. Some of the older ones would have a chair or a tea chest to sit on and the little ones would sit on a long wooden stool that the Da’ made from bits of wood he’d have found up in the local dump. Our tea came out of a big kettle because an ordinary tea pot would be too small for all of us and we got two slices of bread and margarine to eat for our tea. The Da’ would have his dinner placed in front of him and if it was a plate of stew, he’d always pour a drop of milk into it.

Well this particular evening as he was lapping up his stew, he told me to go upstairs and wash my face and hands because he was going to bring me out on his bike when he’d finished his dinner. So, off I went and did as I was told, as we did then, without question. Well in next to no time at all I was sitting on the crossbar of his bike and heading off in towards town. I was enjoying the trip as the Da’ would always be singing and whistling as he pedalled along. We eventually came to a very big house, well it looked like one of them tenement houses that my Da’s cousin lived in, and it was across the road from a park, I later found out it was Mountjoy Square. It was a big house and when we climbed what seemed like a hundred stairs, we went in to a room where a Doctor was waiting to examine me. Now, at this point I had no idea what this was all about but I just did what the Da’ told me to do. The Doctor did his thing by listening to my chest but never said a word and meself and the Da’ were heading home in next to no time at all.

Now, a couple of weeks later, on a Saturday morning, the Da’ tells me to get dressed because he was bringing me into town, and so I did. This time we came to Amiens Street train station. There was a great big group of young boys, all around my own age, standing up near the platform. The Da’ told me to go and stand with the boys and so I did. He pedalled away off home and left me standing there, I had no idea what was going on or why he left me there. A rough looking boy asked me my name and told me we were going down to the country on a train. Then, all of a sudden, the penny dropped, I was being sent away to a boy’s orphanage down the country, but why, what did I do wrong on the Ma’, I was nearly always good in school. So, eventually the bunch of us lads were marched further up the platform where we boarded a train for the country. Most of the other young boys were delighted and excitedly talking about Balbriggan, wherever that was I didn’t know.

And so, it was that I ended up in the Sunshine House in Balbriggan for a week’s holiday. I became pals with a young boy named Billy Pidgeon, he was great because he seemed to know the ropes and told me not to worry and not to be crying.  I was delighted when my new pal told me that we’d be going back home at the end of the week, I wasn’t being left in an orphanage after all. At home, I shared a bed with two of my brothers and I never had a bed to myself until I went to the Sunshine House. I had a great time in Balbriggan playing games and going down to the beach where we were given little black swimming shorts to wear. Most nights we had a film show and on the last night of our holiday there was a concert. I got up on the small stage and sang “Old McDonald had a farm” and I won a prize for it. I couldn’t wait to get home to show the Ma’ what I had won.

I remember one night when it was dark, the Leaders took us for a walk and told us about a man by the name of McKenzie and that every night he haunted the Sunshine House and especially the toilets. I later reckoned that was a way to stop us running in and out to the toilet all night. We were all told to sit down on the ground while we were told a Ghost Story. I was sitting next to Billy Pigeon and we were nearly crying and shaking with the fright, we had to hold each other’s hand to make sure that the ghost didn’t take one of us away. Billy told me to say a Hail Mary before I got into bed and that way the ghost wouldn’t go near me. I knew he must be right because he had been here before and that’s what he must have done as well.

And so, the following Saturday came along all too quickly, it was time to go home. It was very sad really because some of the young boys were actually crying and wanted to stay another week, they had such a great time of it. I remember meself and Billy sitting together in the train watching all the green fields and the cows going by faster and faster as the train picked up speed. And we could even see the beach where we made sandcastles together. So, that was my first ever holiday away from home, a week in the Sunshine House in Balbriggan.