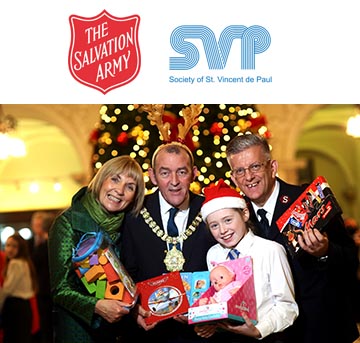 The Salvation Army and Society of St Vincent de Paul (SVP) have teamed once more for their joint Family Appeal – which brings festive cheer to thousands of underprivileged children and families every year.

The 36th annual appeal was launched this morning (Wednesday November 25) at Belfast City Hall by the Lord Mayor, Councillor Arder Carson, who praised both charities for being at the heart of communities.

Last year's appeal distributed over 30,000 gifts to children across Northern Ireland – all of which was made possible by the generosity of local people and organisations.

The Lord Mayor said: “I am absolutely delighted to launch this year’s Family Appeal. The Christmas period is about spending time with our families and sharing gifts with one another. However, for some Christmas can be a very difficult time.

“The Family Appeal is a great opportunity to spread Christmas cheer and help those less fortunate in our society. I would encourage as many people as possible to think of others at this time of year and buy an extra gift for the Family Appeal.”

One of those who have been helped by the Family Appeal is Elle McConville. Elle is a former resident at The Salvation Army’s Thorndale Family Centre.

She said: “The Family Appeal is a Godsend. I grew up in care and often didn’t get any birthday or Christmas presents. I was left in my bedroom most of the time, which has a big impact on me now. I didn’t know what love was due to not being loved.

“About eight years ago I met Paul and now have little girl called Brianna. When Brianna was born I contacted the social services and we were referred to Thorndale. I had my ups and downs there but with support I was able to turn things around. They were amazing, especially at Christmas time when we were given presents for Brianna.

“Paul and I have our own house now but I keep in touch with the staff and pop in every so often for a visit.”

The Salvation Army is celebrating 135 years of mission work in Ireland and 150 years as an organisation. Divisional leader Major Elwyn Harries believes Christmas puts extra pressure on parents, many of whom struggle to put food on the table never mind Christmas presents under the tree.

He said: “The Family Appeal is there to ensure that no child in Northern Ireland goes without a gift on Christmas morning. We ask that the public continue to show their incredible generosity and support because it makes a huge difference to the lives of so many people.”

Pauline Brown, regional manager for St Vincent de Paul in Northern Ireland, said: “The Family Appeal is a vital part of our yearly calendar and really helps us to meet the needs of children in Northern Ireland. More and more people are contacting us every year especially during the run up to Christmas.

“Many family budgets are already under a huge strain dealing with the need for heat, clothes and food. The added burden of providing presents in the festive period can lead to further stress.

“We appreciate how generous the public and the business community are towards the appeal. Your contribution no matter how small does make a difference. Christmas is after all a wonderful time for families and the aim of this appeal is to make sure that every child has a special time on Christmas morning.”

The importance of the Family Appeal has been recognised by organisations across Northern Ireland, including Women’s Aid. Louise O’Kane, a young person service manager at the charity, said: “A mum and her two children arrived at one our refuges on Christmas Eve night last year with two black bags containing their meagre belongings; the mum didn’t even have her handbag, change of clothes or a toothbrush.

“Around 32,000 children and young people live with domestic violence in Northern Ireland – the biggest victims are often the smallest. You could make a child’s Christmas by supporting the Family Appeal.”

Gift donations can be made at any branch of The Salvation Army or SVP NI. Gifts can also be left in any branch of Tesco, Gordons Chemists and First Trust Banks. All gifts must be new and unwrapped and suitable for children and young people - from tiny tots to teenagers.

Family gifts of board games and tins of sweets or biscuits are always welcome. Teenagers can often appreciate gift tokens, CDs and toiletries.

For more information go to Salvationarmy.org.uk/familyappeal