VINCENT’S ‘BOWLED’ OVER BY ROADSHOW SURPRISE 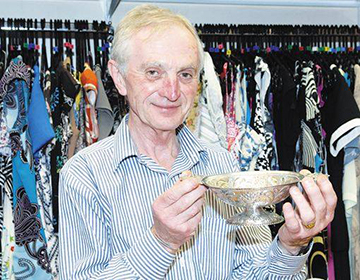 When Pat McVeigh, Manager of Vincent’s Downpatrick shop, came across an ornate little silver bowl he knew there was something special about it.  It was donated to the shop earlier this year and Pat recognised that there was something special about this piece of silverware.  As he was cleaning it, Pat discovered three markings on the bottom of the elegant bowl but not knowing what they meant he took them to three different jewellers. None of them could decipher the markings leaving Pat mystified.

But help was at hand from the experts on the famous Antiques Roadshow, the long-running BBC programme, which last month visited Hillsborough Castle to provide valuations.

Pat took the bowl along and, while he was hopeful of finding out a little about it, did not expect to find the bowl was valuable. This little silver bowl is in fact an 1860 Dutch brandy bowl popular in Holland and widely used as a wedding gift during the 19th century. Both the bride and the groom would drink brandy from the small bowl as a part of the rites of marriage.

The beautiful little bowl was then valued at a tremendous £300-£500.

Delighted, Pat is now planning on putting the silver bowl up for auction at Wilson’s Auction Rooms in Belfast with the hope of achieving the reserve value of £300 and, at best its top valuation price of £500.