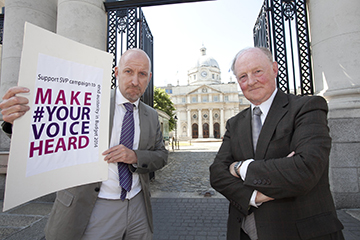 The decision to extend the €100 rate of Jobseekers Allowance and Supplementary Welfare Allowance to those aged 22-24 years, from €144 per week, and to reduce the payments from €188 to €144 for those aged 25 will result in financial hardship and increased risk of homelessness for many families and young people.

Research from the Vincentian Partnership for Justice shows that the cost of a minimum standard of living for a young adult living in the parental home is forecast to rise to €183.99 per week in 2014. These costs include food, transport, clothing and social inclusion. There is a significant gap between what is required for a minimum essential standard of living and the support provided by Jobseekers Allowance, Supplementary Welfare Allowance or the Back to Education Allowance rates for young people. This will result in further struggling and hardship for low income families.

Some young people will have to fall back on support from family and friends to make ends meet. This will be an added strain for parents and families who are themselves trying to cope with cuts made in recent years. Young people are being given the message to emigrate – and while some will be able to come up with the resources to move abroad to look for work, and hopefully benefit from the experience – those with the least resources and the lowest levels of skills and education will be unable to do so. Instead they will have to try and feed and house themselves, participate in society, take up education or training, take care of their mental health and of course look for a job on an income that is far below the poverty line.

Young people who cannot rely on family supports, and those who are homeless or at risk of homelessness are facing additional difficulties. Some young job seekers in low income households, where relationships may be strained, will be at heightened risk of homelessness due to this cut.

Young people living in homeless hostels will have far less money to budget with and will struggle to pay the weekly charge for their hostel accommodation. Their reduced ability to afford their weekly payment may put their place in the hostel at risk. The reduction in the jobseekers payment will mean that it will be very difficult for young people who are homeless to move on to rented accommodation, as they won’t be able to afford the minimum contribution towards their rent. This contradicts Government’s stated aim of ending long term homelessness.

Government representatives have argued that these young people will benefit from the Youth Guarantee, a scheme of training opportunities. But these schemes only last 6 weeks. In any event, someone struggling to make ends meet on such a low income, or who is facing homelessness or the spectre of rough sleeping will be unable to get the benefit from these schemes. Surely we can do better for our young people.