Homelessness & Housing: Living in a Hotel - A Parallel World 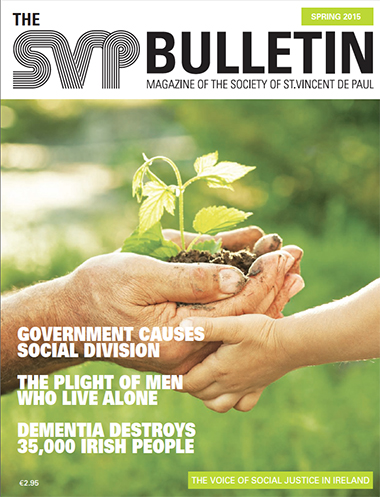 Homelessness has been a long-running problem despite numerous promises from politicians to tackle the crisis. “Homeless is a loaded word; anyone associated with it is automatically judged and often stereotyped” says Peter McVerry. When we think of those who are homeless, we automatically envisage people living on the streets because of drink or drugs but this is not the full story as you will discover in the latest edition of the SVP Bulletin.

In Ireland, the legal definition translates into four types of homelessness: the visibly homeless living rough or sleeping in designated emergency accommodation such as a hostel; the hidden homeless, which include those staying with relatives or friends because there is no alternative accommodation for them, or remaining in institutional care because there is no other affordable option; those at risk of homelessness who have housing but are likely to become homeless through economic difficulties or the threat of violence; and, lastly, people rough-sleeping who are not in contact with emergency services, and who are not staying in emergency accommodation.

The death of Jonathan Corrie, the homeless man who died in a doorway close to Leinster House in 2014, sparked a national conversation about homelessness but many campaigners feel the situation has not improved since then.

A new UN Report has warned that homelessness is found in every country and is on the increase worldwide. It calls on member states to recognise homelessness as a human rights crisis and commit to its eradication by 2030, in line with the new UN Sustainable Development Goals. One of the key factors in rising homelessness, it indicates, is how governments played a part in allowing the expansion of real estate speculation and unregulated markets, which ends up in “treating housing as a commodity rather than as a human right.”

The report also includes a specific mention of the shocking rise of homeless families in Ireland. Leilani Farha, UN special rapporteur on adequate housing, and Léo Heller, special rapporteur on the right to water and sanitation, wrote to the Irish Government in September 2015 and requested a response to their confidential letter within 60 days, receiving a reply eventually on 6 June 2016.

The experts found that more than 700 of Cork city’s 120,000 inhabitants were homeless. “Widespread homelessness is evidence of the failure of the State to protect and ensure the human rights of the most disadvantaged populations,” said Ms Farha. She said the number of homeless has risen due to the lack of affordable housing and the impact of austerity measures.

The Dublin Region Homeless Executive also reported earlier this year that the overall number of homeless children in Dublin had doubled in the past year, with 1,616 children in emergency accommodation, compared to 803 in 2015. There is a clear crisis of homelessness taking place in our country, which must be tackled with action and not promises.

The specially themed edition on “Homelessness and Housing” highlights the work the Society, independently, or in partnership with other agencies, is doing to combat this crisis across Ireland, through providing accommodation and support via SVP hostels and drop-in centres, as well as in petitioning the government to act. You will read first-hand experiences from SVP members visiting families living in hotels and emergency accommodation, learn of the poor housing conditions some people are enduring in the private sector, and also of the new social housing projects being setup to tackle the situation.

What will hopefully become apparent from reading the many moving articles in the Summer edition is that being left without a home can happen to any one of us. In realising this, we must continue to strive to acknowledge our common humanity, and endeavour to uphold the dignity of all whether we live on the streets, in emergency accommodation, are at risk of becoming homeless, or, are a home owner, landlord or politician.