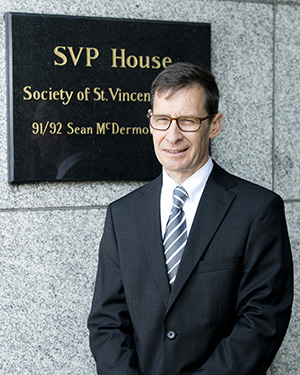 When President Higgins addressed our conference in Dublin in mid-September he laid emphasis on the manner in which ‘greed’ had affected Irish life.

“Greed” can be defined as an insatiable longing for wealth and this, surely, is what destroyed Ireland economically, ruined the lives of many thousands of people, destroyed their futures, forced emigration and caused many other social ills.

President Higgins spoke of “self-centred ideals of consumption” which, he said, had “displaced models of public welfare.”

“Greed, self-interest, the insatiable pursuit of material gratifications, unrestrained competition and the placing of the market as the centre of public policy for all human needs  - such values have become widely endorsed, with sweeping repercussions on policy-making, media representations and, more generally, contemporary public discourse on what constitutes ‘prosperity’ and the good life,” he said.

His reference to ‘media representation’ was astute, because it was not too long afterwards that in some sections of the media there were, perhaps predictably, voices raised to criticise his remarks, to challenge his leadership and to question his attack on greed.

When comments hit home to the root of a problem, there are those who seek to discredit the maker of those opinions, because of the accuracy and the resonance in focusing on the cause of issues.

President Higgins, whose Ethics Initiative this Society is supporting, spoke also of “the gated community of the mind, that serves to protect itself from, or is at best indifferent to, the excluded.”

That “gated mind” was reflected in the criticism targeted at his comments about “greed,” comments which were well made and reflected the accuracy of pointing to what has caused much of Ireland’s social and economic problems.

President Higgins has given leadership. It is now for the community at large to follow and discuss, as the SVP is initiating with other charitable and community organisations, the challenge of living together as a community, ethically, with concern for and the application of social justice to all citizens.