Register for Survive on 5

Waking up Sunday morning I felt unprepared and hadn’t thought through my approach to the week. I started my morning as I often do with a fresh coffee, a vitamin c and some cold mineral water. After all that I sat down to figure out how to deal with the day…that was when I realised, I had already spent almost €1…At that point the penny dropped…this needs a proper plan.

I was in the very lucky position to have cupboards and a fridge with a reasonable amount of food in them, so I decided then that I would avoid buying any more food during the week, unless it was absolutely necessary, but would eat what was there and calculate the cost as I went along.

I then had my actual breakfast of eggs and pitta bread (0.61c), for lunch I decided to be particularly frugal and had some plain boiled rice (0.12c). Unfortunately, this didn’t really fill me and despite knowing I was going to my parents for dinner that evening and trying to save a bit as couldn’t really estimate how much that would cost I still found myself snacking that afternoon having a pack of crisps and a banana (0.42c + 0.25c). Turns out they fed me a meal more expensive than my budget would have allowed…I estimated the cost at €1.75 for what I ate and €2.37 for a drink. I also had a small snack in front of the TV later on (0.63c).

Not a great first day I must say - €7.15 – but really interesting how I am starting to think about it and plan a bit better for the next few days.

At least I had managed to make some soup for lunches during the week so hoping that will help me make a little bit of saving while also being prepared for being out of the house.

Started the day feeling a good bit more prepared for the challenge and the day ahead in general. Had a proper think through what I could ‘afford’ for the day and packed my lunch bag for work accordingly.
There was pitta bread with boiled eggs for breakfast (0.61c again) and a ‘proper’ coffee (0.55c) – which was to be the only one of the day. Then I packed a portion of my soup (0.42c), the last remaining pitta and some cheese triangles (happy cow ones from lidl!) knowing here was a couple of ham and cheese slices in the work fridge (left over from last week) which would make up my lunch in the office – (total cost for lunch €1.12).

When it came to lunchtime I was in a meeting where lunch was provided – free sandwiches and wraps from the good sambo shop…all of which I had to turn up my nose at as they would certainly not have fit into my limited budget for the day. Instead after the meeting I ate my soup and pitta…which was a disappointing alternative, but it was fine. I had a cup of instant coffee (black) and a banana to help get through the dragging afternoon (0.27c.) 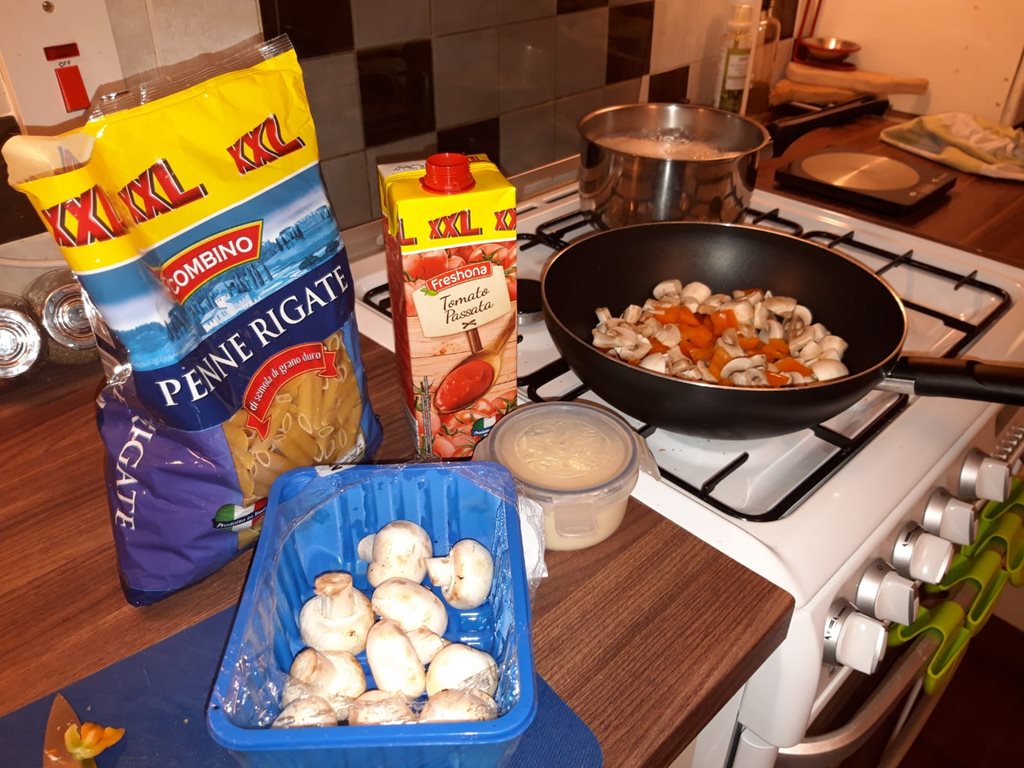 I went straight to the gym from work to get a run done knowing if I went home first I wouldn’t go back out. I got through it fine thinking all the way through about what was in the cupboard / fridge that I could make into for dinner – all I knew was that I wanted volume, I wanted something to fill me up and feel satisfied.

It was to be a very large bowl of pasta with veg, tomato passata and some cheese sauce I had left from a lasagne I had made a few days earlier. It tasted good and there was plenty of it, though there wasn’t much in the way of protein in it, which I would normally have. I made loads, so there was plenty left over for lunch(es). The full amount cooked cost €2.46 and I ate half, so €1.23 for dinner. I went to bed not long after eating so that I wouldn’t be craving a snack of any type.

I was driving to Belfast first thing for a meeting with a colleague there, coffee and toast with peanut butter was the breakfast I mustered (0.55c + 0.45c = €1). I was apprehensive as normally when I have a long drive I will stop and get coffee and probably a snack of some kind too – this wouldn’t be an option today. Instead I packed a bag with what was left of the pasta (it turned out someone else in the house had eaten half of what was left after I went to bed – this was frustrating but it would have been A LOT worse if the whole lot was gone!), a couple of hard boiled eggs and a banana to get me through, total value €1.25.

Both the drive and the meeting went fine, Niamh my colleague there is also doing the challenge so we were busy sharing notes and realising how difficult it is – and how important it is to plan – there is just no room for impromptu purchases / snacks. 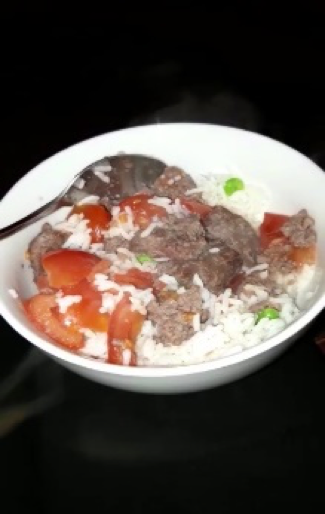 I got home that evening at about 6pm, the plan was to eat rice with left over bean stew from my mums on Sunday, but it really wasn’t what I wanted – instead I was craving something with meat, but meat is way more expensive than beans so I had to do some figuring out. In the end I found some homemade burgers in the freezer which I calculated to have cost €1 each to make so I took one out and defrosted it while cooking up some rice. I also needed to include some veg as I felt I wasn’t eating enough variety… so I heated the burger in the oven with a tomato and I added some peas to my rice…it ended up being a really peculiar ‘dinner’ but to be honest I felt satisfied after it so bonus! Total cost of the dinner was €1.35.

At one point today I started to feel like wahoo – this challenge is nearly over but then also realising no I am only just about half way through. But I was really starting to look forward to the end of it and with that the dawning that for a person / family who live on a low income there may never be a let up, the stress of planning and figuring out and going without and all that goes with it is a constant reality and I really can’t imagine what that is like.

Taking this challenge is an eye opener for me, but that’s all it is, it is not the same as actually living the reality…taking the challenge makes me feel so privileged and lucky that I have the choice to take a challenge but then go back to my ‘normal’ way of life straight after, it does not show me what it feels like to be living this reality.

This was a bit of a mixed up day for me, I had the morning off as I was working late and didn’t expect to be home until about midnight. So I had time to plan the day but also wanted to try and make use of the morning. After a lazy hour, coffee and toast with peanut butter (€1.00) I took myself off to the gym for a run, which was hard but good, but most importantly made me feel like I had achieved something!
I headed to the office at lunch time with lunch and something for dinner in tow. Lunch was to be more soup (so over the soup) and the famous beans are with me too – plan is to have them with the extra rice I cooked last night. Lunch works out fine, the soup serves its purpose and is healthy, not at all what I would have chosen if I had an option but I didn’t so it’s what I had, with a ham and egg sandwich (€1.06). 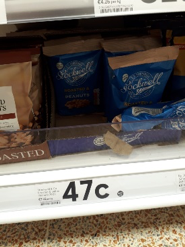 I left the office at about 3.30pm to head for Monaghan where I was facilitating a training session at 7pm, which is an awkward time for anyone but particularly when trying to factor in this challenge. My rice and beans just weren’t going to do it for me, I mean they would have been really hard to eat in that car anyway and with no way to heat them up they were even less appealing.

Luckily I arrived in Monaghan with some time to spare so I popped to Tesco for a look around to see if there was anything I could grab that might suit better. I made my first physical purchase of the week and bought myself a pack of peanuts for 0.47c I threw of few of them in with my rice and had a rather unhealthy but filling tea. I also ate a few more of them on the way home later that night. Half pack gone, cost to my budget 0.24c.

I woke up on day 5 pretty delighted that it was my last day. I found myself hungry and really wanted something hearty, this is probably due to the poor meal of the night before? I had a look over my notes and calculation from the few days and realise that I have done a good job of keeping within budget – I have a total of €6.09 left for the last day. I also still had my beans which I really have to eat today!
For breakfast I had my boiled eggs on toast and a coffee (€1.16), and brought the well-travelled rice and beans to work with me, which I heated in the microwave and it turns out were a really tasty, filling and healthy lunch for a total of 0.65c. I ate that at about 3pm as I had been in a meeting over lunch (I ate what was left of the peanuts around 12pm to get me through) and I found the afternoon and evening was fine after that. I didn’t get home until about 9pm as I had a cricket meeting after work, but had no plan really for my last meal. I did though have a pretty healthy budget left for the last meal of the challenge – I rummaged through the freezer and found some chicken dippers (cheap and unhealthy) and another couple of those homemade burgers. I was totally out of fresh veg so my plate was made up of just meat products that night. A (relatively) expensive (€2.60) and really not great meal, but there was a lot of it and a bit of me was just feeling like go for it – eat it all – what the hell, you can afford it. I was definitely full after it, but with a few cent left in the overall budget I still treated myself to a few cheese puffs (0.35c). And there my challenge ended, I survived. 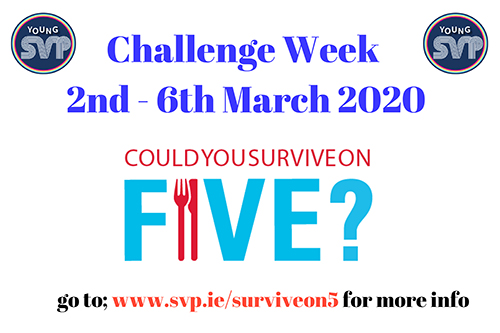 “Food poverty refers to the inability to afford, or to have access to, food to make up a healthy diet, and data from the Survey of Income and Living Conditions estimates that one in 11 people in Ireland experience it.

Families tend to cut back on food when struggling financially because a food budget is easier to control than the cost of rent or utilities, Dr Tricia Keilthy, the charity’s head of social justice, said.” https://www.thejournal.ie/vincent-de-paul-food-poverty-3964511-Apr2018/