There are no strangers here 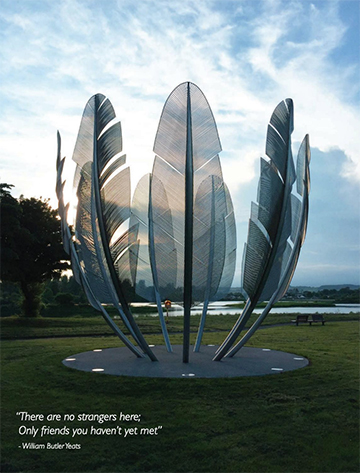 Only friends you haven't yet met

In 1847, the Choctaw Nation heard about the Irish Famine, and the story had such an impact that their community collected $170 to send to the Irish victims, a sum equivalent to approximately €4,000 today. This was sent to Ireland where it was used for food, fuel and blankets for the victims.

The story of the Irish famine resonated with the Choctaws as they had undergone their own hardship 16 years earlier when they were forced to move west of the Mississippi by the government of Andrew Jackson in a journey that became known as the ‘Trail of Tears’.

“We helped the Irish because that’s who we are and what we are,” explains tribal council speaker, “we remembered the sorrow to befall our people, and we felt the same for the people in Ireland. $170 might not seem like much, we were poor, yet each of us eagerly gave to help our brothers and sisters.”

A monument of gratitude to the Choctaw Nation was erected in Midleton, Co Cork. The sculpture takes the form of an empty bowl cupped by feathers, a poignant embodiment of the Choctaw Nation embracing a starving people. What this story illustrates is the compassion and care that “strangers” can have for one another.

As volunteers and donors to the Society, there is immense compassion and drive to ease the suffering of people who they do not know personally. Likewise, for those we assist, they allow ‘strangers’ into their homes where they share their deepest sufferings. This relationship in many cases changes over time and those ‘strangers’ become friends sharing a bond of understanding and kindness.

The Society in Ireland was established in 1844 a year before the Famine. It has witnessed a civil war, a war of independence, two World Wars and several economic recessions and up to present day our volunteers continue to help people who they do not always know but for the greater good want to bring about change. Similarly, SVP relies heavily on the generosity of the public to support those most vulnerable. This money is donated through the kindness of people who want to help people they have never met before but can empathise with their struggles.

But SVP doesn’t just operate on the island of Ireland; it is an international organisation present in almost 150 countries reaching out to over 30 million people. All of this work is only possible through the selfless dedication of our volunteers and the kindness of donors.

In this edition you will read examples of the constant activism SVP carries out by petitioning the government to implement positive policy changes for those we assist; the recent “Stories of Struggle” and “Paving a pathway out of poverty” Social Justice campaigns, which highlighted the many challenges, people struggle face. You will learn how 800,000 active members and over one million volunteers work throughout the world to help people in need; meet the eight SVP Youth Development officers and the work they do in colleges and schools; the recent opening of a new SVP housing scheme in Dublin, and many more stories on the work and activities of SVP.

“I fondly reflect that the friendship between the Choctaw and the Irish continues to blossom. Few, if any connections have lasted so long, and certainly none have known as much mutual respect, compassion and laughter as that enjoyed by Ireland and the Choctaw”.