Tánaiste - It’s the Hardest Job in the World 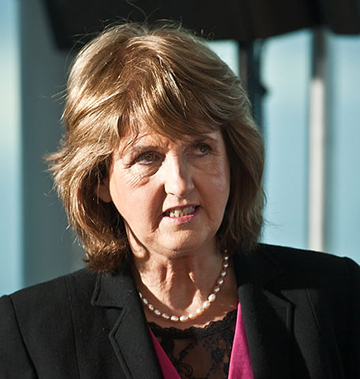 It’s the Hardest Job in the World. That’s the title of our research into the lives, struggles and resilience of one parent families being assisted by the Society of St. Vincent de Paul. It’s so called because parenting alone and on a low income is such a difficult challenge, yet these parents raise their kids against all odds. We presented the findings of this research to Tánaiste Joan Burton on the first of October when we met with her about Budget 2015. We discussed with her a broad range of issues affecting all low income families and people we assist, including welfare to work and income supports for children and families; help with water charges and housing supports.

We asked how Government planned to assist people to move from welfare to work in the fairest way and about the future of income supports for children and families. Officials talked about the recently announced €30 a week per-child payment for parents returning to work. This payment will be for all parents who have been unemployed for over 12 months and who leave the Live Register. The payment will be simple to understand and administer – and sounds like a positive development. We are relieved to hear that Child Benefit will not be cut in Budget 2015, but like all welfare payments, they lose their value as they are not kept in line with inflation – a concern we raised with the Tánaiste.

On the day that water charges commence, we called on the Department of Social Protection to extend their help with water charges beyond those who receive the Household Benefits package. SVP has been calling for other low income groups – those who receive the Fuel Allowance payment - to also be protected from the cost of water charges with an annual €100 payment. This would include one parent families receiving One Parent Family payment – the group most at risk of poverty. We were told that nothing has been decided regarding other groups being assisted. Budget 2015 needs to help a wider group of low income households with water charges.

The housing crisis is a major problem for many people in and around Dublin, and other urban areas, who cannot afford their rents. Rent supplement levels in parts of counties Meath, Wicklow and Kildare are much lower than most rents even at the lower levels due to recent rent hikes in the past year. Increasing numbers of families are losing their rented homes – homelessness is on the rise – so we asked for the Tánaiste’s Department to intervene to ensure that people can better afford their rents. We await decisions and action on this problem, which is growing faster than Government ability to respond. And raising children under the spectre of homelessness? Well, that must be the hardest job in the world.