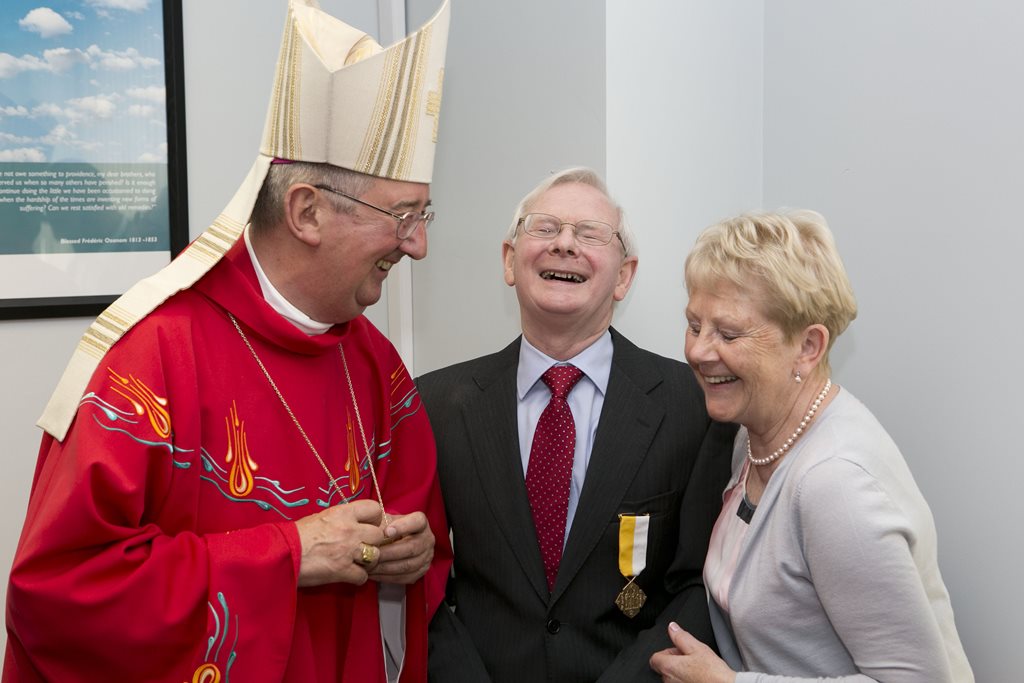 In July, long standing SVP member John Monaghan was awarded The Pro Ecclesia et Pontifice award, the highest papal honour that can be bestowed on a layperson, for his contribution to the work of the Society of St. Vincent de Paul in fighting poverty and to the advancement of SVP’s role as one of Ireland’s leading organisation campaigning to end poverty and inequality.

The presentation of the award was made at a special mass at the SVP national office in Dublin by The Most Reverend Diarmuid Martin Archbishop of Dublin.

John was kind enough to give up some of his time for an interview to talk about his involvement with SVP and what it means to him to be awarded the Pro Ecclesia et Pontifice.

“After that phone call…there was no turning back!”

John first volunteered with the Society in Leixlip in late 1985 when a friend phoned to ask if he could help to bring some of the older people to the Conference Christmas party. The Society quickly identified the passion and talents that John could bring to SVP, and from that point on there was no turning back! From 1985 to 2010 John was an active member of the Leixlip Conference, and in addition to Visitation work he was also twice appointed to the roles of Treasurer and President.

During this period The Society was beginning to develop and formalise its approach to advocating for Social Justice and in 1998 Noel Clear, National President of SVP at the time, asked John to set up and chair a National Social Policy Group. The importance of Social Justice was soon elevated within the Society and John was appointed National Vice President by Brian O’Reilly – a position he held until 2012.

John remembers this period as an incredibly busy one, putting together Pre-Budget Submissions, addressing Ministers and the Oireachtas Committee, and appearances on radio and television shows from Morning Ireland at 7am to Vincent Brown at 11pm, and many others in between.  The calls came in 7 days a week and John recalls numerous holiday when his mobile often rang with ‘urgent’ requests from journalists asking for comments on various issues.

John is passionate about the role SVP has to play in addressing issues of social injustice.

“SVP has a distinct voice, based on the ethos and vision of Frederick Ozanam, Saint Vincent de Paul, and our experiences on the ground. And as a non-political organisation we could give out to each successive government! I always think that when everyone hates you, you know you’re doing something right!”

When asked about the meaning of the Social Justice and advocacy work of the Society he said “It is part of our mission statement and isn’t optional for the Society, it is mandatory.  This goes back to Saint Vincent de Paul, he said that you can’t be content with just tiding someone over, you have to look at the conditions that got them there and advocate to change them. ”

And John certainly did that. Along with the National Office Social Justice team, which he helped to put in place, John helped the Society to advocate for changes to Early Childhood Care and Education and highlighted issues around child poverty, energy poverty, and rent supplement well before they were ‘popular’ topics.

When asked about the impact John had on the work of the Society, John-Mark McCafferty, SVP Head of Social Justice and Advocacy,  said “John, the household name of the Society of St. Vincent de Paul, elevated the organisation’s profile. While everyone knew of SVP, people were less sure what we did, and until the late nineties, were probably unaware of what the Society stood for from a Social Justice perspective.

“All that has changed - thanks to John. During austerity, John’s voice, and those of the team he established, helped to ensure that programmes and supports were as protected from cuts as was possible in the stringent circumstances. “

But it wasn’t all politicians and media calls. John was also an active member of his visitation Conference in Leixlip and when asked for his most memorable day John told us about a family he supported during his time there. “I worked with a family in Leixlip for about 10 years. The parents had some learning difficulties and their son had a speech impediment. We helped arrange speech therapy sessions, we drove them to appointments, we supported the family throughout. My proudest day came when I received a phone call to say that the son had graduated with a degree in electronics. He was the first in his family to go to College. We had helped to break the cycle of poverty for that family and the son is not in the same position that his parents were. Those are the things that stay with you – bringing a real change to someone’s life”

“The Pope had been hoodwinked…”

One of the things you notice when you speak with John is his inherent modesty. No achievements are claimed as his own, rather a group effort, and talk of the award and his work invariably leads to praise of another colleague. This is especially obvious when John recounts how he first heard about the Pro Ecclesia et Pontifice award.

“I first heard about the award last November when John-Mark called to tell me that I was being put forward for it. My first response was ‘Thank you, that is lovely, but no thanks!’ I felt that there were many other people in the Society who should get the award, not me. The next I heard about it, the Pope had been hoodwinked and I was to be awarded the medal!

“I couldn’t believe the number of people who came to the ceremony, but this isn’t a recognition for me, it is a recognition for the work that has been carried out by all of the people who have worked for the advancement of Social Justice within the Society over the years.

“I see it as a signal that we have to continue to use our voice to influence change on behalf of those that we help”.

Before he left, we asked John if he ever regretted taking the call from his friend in 1985; “Not at all” He said “It might be a cliché, but I believe that over the years I have gained and learned so much more from the people that I have had the privilege of meeting than they have gained from me.

“When you see the bravery of people in difficult circumstances, the unseen heroes, thousands of them that we meet every night of the week, they are the people who make it all so important.”