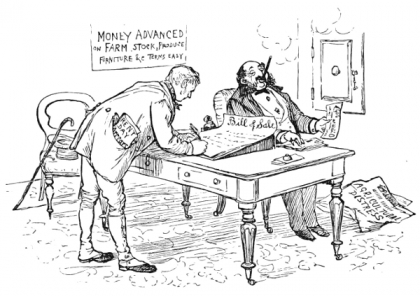 Irish people are famous for not complaining directly about a bad service.  “Grand” we reply when asked if everything is okay.  Instead of articulating our discontent directly with service providers, we gripe to everybody else instead.  A rule of thumb amongst restaurateurs is that if someone is unhappy with their meal they will tell ten people, while a good experience is only heard by one.

It’s not always easy to make a complaint against a service provider, especially when you owe them money, and more difficult again if the service is provided by someone who may feel like ‘a friend’.

This was the experience of a couple from Donegal who were in debt to the regulated moneylender Provident Personal Credit.  Regulated money lenders give short term loans at high interest rates to people who may not get credit otherwise.   ‘Friendly’ agents sell these loans on the doorstep, keenly aware of the financial demands on the household.  These doorstep loans should only be given out on the basis of a households’ ‘ability to pay’.   While our main concern is the number of multiple loans to the same customer or a family member in the same household, for the couple in question, Provident Personal Credit withheld part of a subsequent loan as payment for the previous loan, which is forbidden by the Consumer Credit Act. The Central bank uncovered 117 cases of this practice in the Donegal area alone.

Thankfully the couple in Donegal had strong advocates and recourse to the Financial Ombudsman Provident Personal Credit were ordered to write-off the loans and the couple received financial compensation, while Provident was fined €105,000 by the Central Bank due to the similar cases uncovered.  A fair amount of evidence is required to uncover such cases – so making people aware of this case is really important to encourage others to come forward and to prevent similar experiences.

So what worries me is that little is being done to ensure that we are all made aware of this story – and how it might affect us as consumers.  My hope is that publicity of this case makes borrowers aware of their rights and makes people a little more questioning of the practices of moneylenders. With over a third of a million customers of regulated moneylenders in Ireland, that could amount to a lot of similar cases. It’s the job of the regulator to make us aware of such breaches so we the consumer are wiser about entering into any future arrangement with ‘friends’.