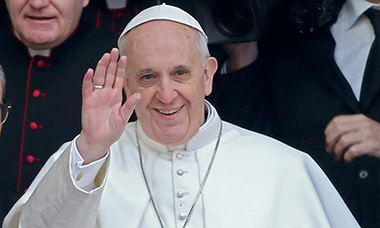 There’s a picture of a young boy bawling his eyes out in the face of Pope Francis on Thursday’s Irish Times front Cover. Complete with miniature papal garb, the young ‘mini me’ pope cries at being somewhat star struck while being presented to Francis. The image has the Pope as a warm character, authentically connecting with people – and his credentials on issues affecting people are now well established.

He’s by no means the only Bishop of Rome to talk about social teaching, but perhaps the most effective since Paul VI to resonate with audiences about social justice – at a time when the Church badly needs something to engage people about; to show its relevance in our world. Whatever your own beliefs are, and despite the myriad unacceptable scandals surrounding the Church, the social message of Pope Francis is worthy of attention and, if we really think about what he says, challenges the very structures at the heart of our social and economic systems.

I was a Guinea-pig last Tuesday for one of the first ‘livestream’ of the Icatholic.ie website. The live online broadcast, also involving Trocaire, Social Justice Ireland and the theologian Sarah Mulligan, took place in the old, parquetted floored halls of St. Patrick’s College Maynooth. We discussed the relevance of the ‘social gospel’ of Pope Francis – Evangelii Gaudium, and on the basis of my advocacy work with the Society of St. Vincent de Paul, I selected the following quote from it (para 203):
"It is irksome when the question of ethics is raised, when global solidarity is invoked, when the distribution of goods is mentioned, when reference is made to protecting labour and defending the dignity of the powerless..."

President Higgins has commenced a broad public discussion on ethics at a time of great scepticism in institutions in Ireland, with both the charity sector recently and police system currently under fire. We’ll interact with the heart of this debate, from the perspective of people assisting and speaking up for many of those being left behind by Irish society, and by the austerity measures in past and future budgets. Yet if we’re not careful, ethics appear so theoretical, making it easier to dismiss in the face of economic factors, vested interests or just more salacious stories in public conversation.

Similarly, ‘solidarity’ is regarded by some commentators as worthy but dull - and ultimately hackneyed and irrelevant. Yet the compelling message of the book The Spirit Level is that societies with greater social solidarity tend to be more prosperous, safer and more sustainable for everyone. Pope Francis talks about very radical, challenging things – the sharing (put another way, redistribution) of wealth in societies for the benefit of poorer, less powerful people; safeguarding of workers’ rights; and ‘rejecting the absolute autonomy of markets and financial speculation’. These actions are the very things that make up social solidarity, yet the very things elusively out of reach of Irish Society….for now. If our senior politicians really adopted the principles of Evangelii Gaudium, there could be a fundamental shift towards fairness – but of course not everyone would like that.