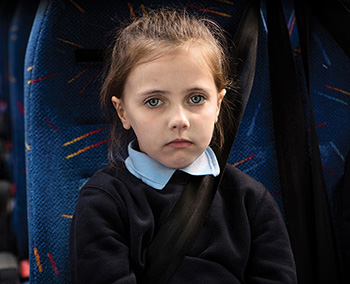 As Christmas looms SVP is receiving an average of 1,000 calls a day seeking help

Despite the improvement in the national economic figures, calls to the Society of St Vincent de Paul (SVP) are at a very high level.

“Last year our volunteers visited approximately 50,000 families over the winter and we expect to visit at least the same number this year. At the moment we are receiving over 1,000 calls a day to our offices around the country”, said SVP National President Kieran Stafford at the launch of the Society’s Annual Appeal.

Save someone from a life of poverty is the theme of the SVP Annual Appeal which emphasises the effect of poverty on children and their future.

Mr. Stafford said, “Although we are now among the top five richest countries in the world we still have over 16% of the population (780,000 people) living below the poverty line.

“Poverty in Ireland in 2018 takes many forms, and is primarily driven by low income and lack of access to good quality jobs and affordable housing, health, education and childcare.

“In our engagement with families and individuals living in poverty, SVP volunteers encounter many complex situations that require a variety of responses.”

“Many of the families we visit will struggle to make ends meet this Christmas and some will consider borrowing money to meet the extra expenses they face at this time of year. Being able to access affordable credit, rather than loans with extremely high interest rates is essential if families are to avoid becoming over-indebted.  We would urge anyone who is struggling, particularly with the cost of education, fuel and food to come to SVP for help.”

This Christmas, SVP has put children at the heart of its Annual Appeal and Kieran Stafford said that is because they are the most vulnerable and should not suffer because society has got things so wrong.

“In his inauguration speech last Sunday, President Michael D. Higgins quoted some lines from the Democratic Programme of the First Dáil in 1919 setting out the first duties of the Government of the Republic. This included the duty ‘to secure that no child shall suffer hunger or cold from lack of food, clothing or shelter’. Although written almost 100 years ago, it remains pertinent today.”

Mr Stafford also said that the generous support of the public is so important for those SVP help each year at Christmas.

Nichola Mullen, Head of Fundraising, said that the appeal would be promoted across TV, radio, press, outdoor and on social media over the next six weeks.

“The advertising will feature two stories based on real experiences where children would have lost out were it not for the generosity of the public allowing SVP to step in” she said.

In addition to direct donations, there are other options to support at www.svp.ie/appeal, including the Giving Tree Appeal, the Food Appeal and a Virtual Gift store.

SVP ANNUAL APPEAL
How to donate