A Huge "Try" by Cork Con for SVP 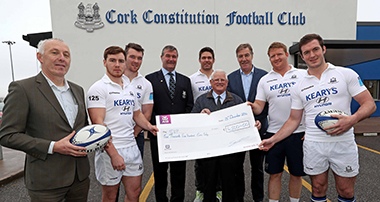 Former all Black Captain Sean Fitzpatrick, was the special guest at Cork Constitution’s second annual business lunch held in the clubhouse on November 18 which saw a large attendance from both the club members and Cork’s business community. Cork Constitution President Jerry Holland welcomed the guests and urged them to dig deep and give very generously to the chosen charity for this year’s lunch, The St Vincent de Paul.   John O’Mahony, father of Munster captain Peter, acted as MC.

Cork Constitution’s own Donal Lenihan welcomed Sean and reminded him that nobody beats Ireland 29 times in a row! Sean Fitzpatrick introduced himself to the guests in Irish, proudly announced that his grandfather had immigrated from Thurles to New Zealand in 1920 and he himself held an Irish passport.  His proudest moment as an All black came in 1996 the first test series win by a New Zealand side in South Africa.

After clinching the series he was greeted by an All Black great, Don Clarke who told him that he could now die a happy man after the series win. To gasps from the guests, Donal informed Sean that there is only one All Black jersey hanging in the Club house and that was presented to Tommy Kiernan in 1961 by one Don Clarke.

Accepting the €4500 donation Brendan Dempsey SVP Regional Vice President thanked Jerry Holland, Donal Lenihan and Cork Constitution for their generous support of the Society  The money donated will be used to provide coal and fuel to many families and individuals in need throughout Cork.