A warm Drogheda welcome to International President of the St. Vincent De Paul! 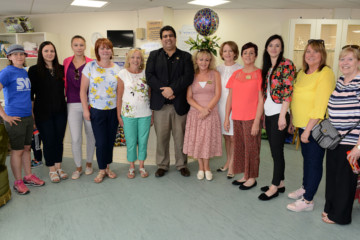 It must have felt more like his native Brazil than a town in Ireland for President-General of St. Vincent De Paul, Br Renato Lima de Oliveira, who was given a warm Drogheda welcome on his recent visit to the town.

The reason for his visit was the official opening of the new Vincent’s ‘Living’ Shop on George’s Street in the heart of the town. It was a warm June day, and the sun beamed down on the considerable crowd, which had gathered for this special occasion.

The National President Kieran Stafford accompanied Br Renato, on this their first visit to the town. Both were captivated by the rapid success of our new shop, considering we had only moved into this our new premises at the end of May. Charity shops were a foreign concept to Br. Renato as he explained they don’t have them in Brazil.

In March last we received just two months notice to vacate the building where we previously ran our thriving Vincents ‘Living’ shop for the past four years. A monumental challenge was in hand to find new premises and to relocate in such a short timeframe, all without loss of revenue.

To see the impressive, well-appointed shop filled with the finest furniture, clothing and household items, you would ever imagine was the result of a mammoth effort by Staff, Tus/CE participants and Volunteers  - to get those doors open in just a matter of a few weeks.   With the new store fully stocked and ready for business, people were queuing on the day of opening to buy the goods on display.

The pride and ownership that the shop managers and all who work in retail clearly take with their responsibility is unmistakable. The way they share the ethos of SVP with customers and visitors alike, has contributed to the expansion of the shops, and they have won numerous awards locally, nationally and internationally.

“It was an incredible honour to welcome Br Renato and Br. Kieran to see our new shop, something which gave great recognition to the work of the St Francis Conference,” said Michael Grogan, incoming Area President.

“In the Drogheda Area revenue from the Vincent’s shops has increased threefold over the past five years, and ‘Living’ has been a substantial part of that growth, so it was imperative for us to get up and running again as soon as possible.”

Revenue from the shops is now the main source of funding for the Visitation Conferences in Drogheda, overtaking public donations in recent years.  “There is such a strong connection between the shops, the Conferences, and getting help to people who are in need,” explains Michael.  “Increased revenue means increased help to those who need it." 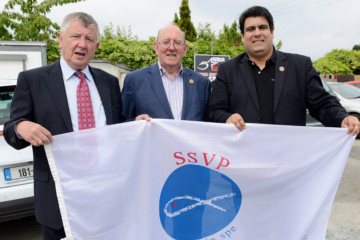 The Living concept was developed initially to help young and migrant families to acquire good condition household goods at a reasonable price.  Their needs were for beds, wardrobes, household furniture, and clothing - all of which were necessary for a basic standard of living.   However, today our customers range from those who are in need of household furniture or clothes, to those browsing for a book or hunting for that bargain to take home.

If there’s one thing St Vincent de Paul understands, it’s responding to a challenge in the face of hardship. “We want to reach out to those people who are in need and encourage them to ask for help. People really don’t have to go without, but we can’t help you if you don’t ask.”

Our Visitation Conferences provide support in many forms, some of which are food, fuel and education. We also help to bridge the gap for expenses like funeral bills and medical bills.  All of this support relies on donations from the local community, which in Drogheda, is clearly a force to be reckoned with.

In his final words, Michael expressed his interest in Bro. Renato’s circular of January 31st, 2018 and his recommendation of the establishment of the International General Ombudsman, and also the great similarity there is throughout SVP worldwide. He urged consideration to be given to the establishment of an Ombudsman at National Level for many of the same reasons as outlined in the circular.

Before Br. Renato left for his onward journey, Joe Sweeney, Area President was delighted to present his honoured guest with a souvenir book on the town, but sadly there wasn’t time to visit his namesake, St Oliver Plunkett!