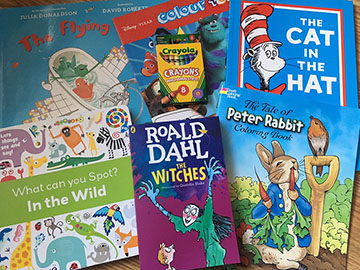 Research shows that books in the home improve educational outcome

The Society of St Vincent de Paul (SVP), East Region,(which covers Dublin, Kildare & Wicklow) is asking for people who received gift vouchers for books at Christmas to donate the vouchers to SVP or purchase children’s books with the vouchers and donate them to the Society.

The books will be provided by SVP to children in the families they visit in the Society's East region as part of a project in the region called WordPower.

WordPower is based on the concept that having more books at home when growing up, even if you don’t necessarily read more, improves educational outcomes. The books can be for babies, children, pre-teens and young adults and are for families to keep and share with others in their family or community.

A recent study from researchers at the Australian National University and University of Nevada in the US discovered that those who didn’t go to University, but who had a lot of household books as a teen had the same level of literacy as adults with university degrees, but who grew up with fewer books.

The positive impact was greatest for those with higher levels of disadvantage, meaning lower income families could narrow the education gap by exposing their children to more books in the house.

The study, found the number of household books at age 16 had a direct positive relationship with literacy, numeracy and IT skill in later years – independent of how much tertiary study a person did, or how often they read as an adult.

The concept of SVP WordPower began in 2016 with Michael Boyle  an SVP member in Tallaght in West Dublin. Along with providing practical support in the form of financial help with food, utility bills , education costs and meeting the unexpected needs, he began bringing new books to families being visited. “The introduction of books for the children in families went down very well”  he said.

The idea has now been adapted by the wider East region as a pilot project which will run until June 2019.

SVP recognises the importance of education in helping people out of poverty and helping every child reach their full potential.

The WordPower project aims to empower families, provide encouragement to parents and give opportunities to children and help them get school ready.

For more information or to find out how you can help contact the WordPower Team at wordpower.east@svp.ie.