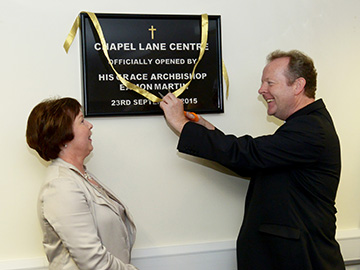 Wednesday 23rd September saw a dream become a reality for Armagh’s Saint Patrick’s Conference as His Grace Archbishop Eamon Martin took time out from his busy schedule to officially open the Conference’s new Chapel Lane Centre. The centre situated in one of the oldest streets of Armagh once comprised of three old houses dating back to the 17th century.

Over the centuries these houses have nestled underneath the watchful eye of St Patrick’s Church of Ireland and the Malachy’s Centre (the reputed birthplace of St Malachy Saint and Scholar of Armagh).  It is a fitting tribute that the SVP Chapel Lane Centre will be used as an education establishment for local people in keeping with our scholarly saints.

A strong Church and cross community representation was evident on the evening as guests included The Very Reverend Dean Gregory Dunstan (COI) and the Reverend Tony Davidson, with Fr Peter Mc Anenly (Armagh Parish administrator) and Fr Rory Coyle. Aidan Crawford (Regional President) and Cormac Wilson (Regional Vice President) were in attendance as were Ivan Burns from Christians Against Poverty and the President of the Royal British Legion and two members of the PSNI. Previous Chief Executive (John Briggs) of the old Armagh City and District Council and Meala Campbell (SDLP) also attended.

The St Patrick’s Conference President Kathy Donnelly provided an opening address welcoming His Grace Archbishop Martin, invited guests and Conference members. Archbishop Martin gave a short address to those present paying praise to the work of the Society and its many volunteers who gave of their time so willingly to help those in need. The Very Reverend Dean Dunstan was invited during prayerful reflection and official blessing to participate in the Gospel reading of the day.  Aidan Crawford (RP) provided an update on the refugee crisis and the work of the Society.

The official marble dedication plaque was presented to the St Patrick’s Conference by Mr and Mrs Seamus and Patricia Mc Cann and family ARMATILE.

All in all a pleasant evening was had by all in attendance.