Area Gatherings in the South West

The South West Region has been busy holding five Area Gatherings over the past 6 months. The purpose of these gatherings is to bring SVP members together to share and learn from one another, to discuss sample case-studies and to hear from guest speakers.

Each gathering had about 25-30 members and they were also a great opportunity to affirm the volunteer spirit of SVP and recognise those who have given long years of service.

We kicked off in February with a joint area gathering of Cork South City West and West City.  After discussing some difficult cases and hearing from a Community Welfare Officer the gathering had the lovely opportunity of seeing former National President Mairéad Bushnell receiving her own long-service medal.  Mairéad had presented many herself but this was the first time she was the recipient. As well as long-serving members there were some new members too:

"As a new member I found it very informative and engaged. Great night, great charity."

In March we moved on to the Kingdom when the next area gathering was held in Killarney.  There was an enthusiastic attendance by members from as far away as Castletownbere right across to Rathmore.  Amongst the topics covered was building links with the Traveller community and solutions to debt issues.  The honour fell to Regional President Christy Lynch to present long service medals, some of the members had over 40 years’ service!  The area team may have their work cut out following this gathering.

"This was a wonderful informative evening and hope we can do it again sometime."

The next Area Gathering was held in April in Charleville, North Cork with people travelling from all over the area from Kanturk to Mitchestown. In response to hearing the long years of service members had given, one member wrote:

"I was amazed at the amount of years of service given by the volunteers.  Perhaps we should now entice young people to join as volunteers."

In May we returned to Kerry where the Area Gathering was held in Tralee, the home town of the Regional President. There was a great turn out and some very lively discussions were had.  Members also had the opportunity to thank outgoing Area President, Junior Locke, and again members were awed by the number of years some of the long service recipients had given to SVP.

"The case-study exercise was really good. It’s always helpful to hear what other Conferences do.  It also reminds us of the great work done." 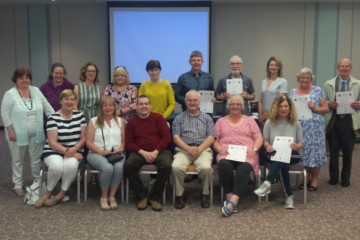 The final area gathering for the 1st part of the year was held in South Kerry, In the delightful
O’Donnell House in Killorglin.  Members travelled from Caherciveen, Castlemaine and Killorglin for the evening and contributed to informative discussion from which members garnered new information and additional supports.  As one member said of the area gathering:

"Found this gathering very enlightening and makes it all seem worthwhile" 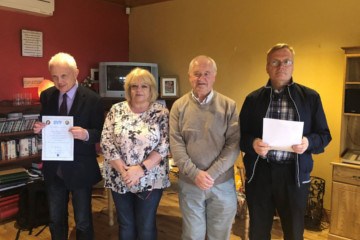 Throughout the gatherings many topics were discussed, such as housing, debt, money-lending, addiction and education.  We all learned a lot from each other and received tips, guidance and advice on how to deal with common problems that many people in need experience.  As ever, members enjoyed meeting each other, discussing different topics, catching up with old friends and making some new ones.  The Area Gatherings are co-facilitated by area presidents and the member support team.  I expect there to be many more in the months ahead!