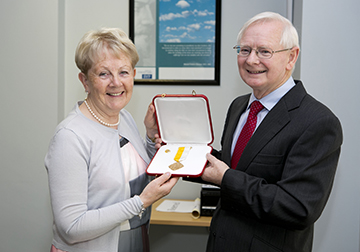 The Pro Ecclesia et Pontifice award, the highest papal honour that can be bestowed on a layperson, has been awarded to Professor John Monaghan for his contribution to the work of the Society of St. Vincent de Paul (SVP) and to the development of SVP’s voice promoting Social Justice issues in Ireland.

Pro Ecclesia et Pontifice, also known as the "Cross of Honour" was established by Leo XIII in 1888, It is currently given for distinguished service to the church by lay people and clergy.

The presentation of the award was made at a special mass at the SVP national office in Dublin last week (Wed 1st July) by The Most Reverend Diarmuid Martin Archbishop of Dublin.

John Monaghan has recently stepped down as a long serving Vice President and Board member (1996-2014) of SVP.

He has been a dedicated Vincentian in his work as an SVP Conference member in Leixlip, County Kildare and also as Vice President for Social Justice, John has also developed and led the National Social Justice and Policy Committee from the late 1990s to 2012 and grew the staff team which enable the Society to carry out its policy development and advocacy work among Government, media and wider civil society.

SVP National President Geoff Meagher said; “The SVP is indebted to John not alone for being the public face of the Society and his work for social justice for very many years but also for his guidance, wisdom and hard work as a volunteer and member of the National Board. We are delighted that he continues his work with the Society in a training capacity.”

John-Mark McCafferty, SVP Head of Social justice and Policy said; “We are very pleased that his great work for social justice in Ireland, on behalf of some of the most vulnerable and marginalised in Irish Society, has been acknowledged by the Church.

“His call for a fairer society for all has always been predicated on his own experiences in his early years in Drimnagh, Dublin and on his Conference work, visiting families and people in their homes and assisting with human contact and financial support.” 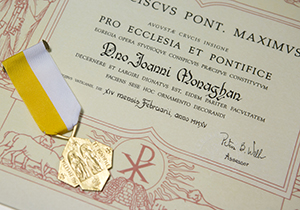