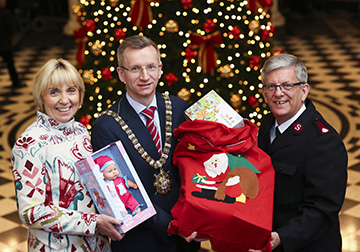 One of Northern Ireland’s largest and longest running Christmas present appeals is now underway. The Salvation Army and Society of St Vincent de Paul (SVP) have teamed up once more for their joint Family Appeal – which brings festive cheer to thousands of underprivileged children and families every year.

Last year's appeal distributed 50,000 gifts to children across Northern Ireland – all of which was made possible by the generosity of local people and organisations.

The 37th annual appeal was launched at Belfast City Hall by the Lord Mayor Brian Kingston, who praised both charities for being at the heart of communities and highlighted the importance of taking part in this initiative.

He said: “Christmas is a time of year when we particularly think about those in need and what we can do to help them. The Family Appeal is a simple, easy way to support families who need a boost.

“It is an expensive time of year for everyone but picking up just one extra gift and giving it to this appeal could really make someone’s Christmas Day even more special. You won’t see the delight with which they receive and open your gift, but when you sit with your own family and friends on Christmas Day you will know that you have helped someone else feel cared for and appreciated."

One of those who have been helped by the Family Appeal is Colin McClean, from Belfast. Colin is a former resident of The Salvation Army’s Thorndale Family Centre, where he took part in a 15-week parenting assessment programme with his daughters Erica and Phoebe.

The father-of-two praised The Salvation Army for helping him rebuild his confidence as a parent after his life hit rock bottom. Colin, who has now been in recovery from alcohol misuse for almost three years, said: “When I was in Thorndale, the thought of Christmas and providing for my two girls was a big stress. It was my first Christmas with them and I had just given up my job to come into Thorndale.

“But the support The Salvation Army gave me through the Family Appeal was unbelievable. We were given gifts and food parcels and they made Christmas dinner for us. Things like that made that first Christmas I spent with my two girls extremely special.”

Major Elwyn Harries, leader of The Salvation Army’s Ireland Division, thanked the public for their generosity and called on people to keep thinking about others at Christmas.

He said: “The Family Appeal would not be possible without the incredible support we receive from communities around Northern Ireland. For many families, Christmas is one of the most stressful times of the year. Budgets are already stretched as parents deal with everyday essentials, without an added burden of providing presents as well. We are honoured to play a part in ensuring no child in Northern Ireland goes without a gift on Christmas morning.”

Pauline Brown, regional manager for St Vincent de Paul, added: “Unfortunately poverty is still very real in Northern Ireland and every year, the Family Appeal gets bigger and bigger. In fact, last year almost 20,000 more toys were distributed compared to 2014. This is a testament to the unwavering generosity of our ever-giving public, but sadly, also to the increasing level of need in NI as more and more families face financial difficulties and need our help.”

She adds, “I would also like to thank both the public and the businesses who donate to the Appeal each year, and especially to the companies which act as drop-off points including Tesco, Gordon’s Chemist and First Trust. The Appeal just wouldn’t work without the support of so many people and we are very grateful.” 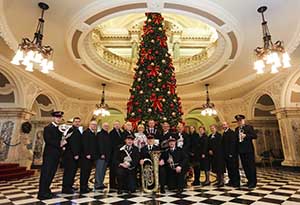 Gift donations for children aged from newborn to 16 years can be made at any branch of The Salvation Army or SVP. Gifts can also be left in any Tesco, Gordons Chemist and First Trust Bank. All gifts must be new and unwrapped, and the appeal would especially welcome donations for older boys and girls such as gift vouchers, board games, selection boxes, and toiletries. For more information go to Salvationarmy.org.uk/familyappeal or for SVP Giving Tree details and guidelines.