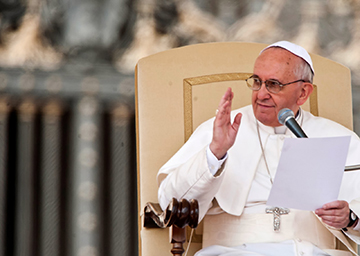 “It is time for political leaders to take up the call of Pope Francis to protect the most vulnerable … [and] to ask ourselves what kind of recovery do we want?” – Bishop McAreavey.

Ahead of the publication of Budget 2015 on Tuesday 14 October next, a network of seven Catholic Social Justice groups has published a joint statement on promoting real recovery by addressing inequality, which appeals to Government to prioritise reducing inequality.

Launching the joint statement today, Bishop John McAreavey, chair of the Council for Justice and Peace of the Irish Catholic Bishops’ Conference, stated, “It is time for political leaders to take up the call of Pope Francis to protect the most vulnerable. The urgency of the Pope’s appeal to world leaders to address inequality is underlined by the experience of organisations working in the field of social justice, nationally and internationally.  These organisations see at first-hand the devastating consequences for individuals, families and communities when basic rights are not protected. The community, voluntary and faith based sectors play a vital role in alleviating the most pressing needs but, ultimately, only a change in policy at governmental level can address the root causes of social exclusion, and address the long-term costs.”

The statement is calling on the Government to target measures to address inequality, on both a national and international level in Budget 2015:

Promoting real recovery by addressing inequality
In an address to the United Nations in May 2014, Pope Francis called for an end to the economy of exclusion through actions that will have a real impact on the structural causes of poverty and hunger, attain more substantial results in protecting the environment, ensure dignified and productive labor for all, and provide appropriate protection for the family.

Reducing inequality within and among countries is one of the seventeen sustainable development goals currently being reviewed by the international community.  This is in recognition of the fact that inequality fundamentally undermines social cohesion and participation in society.  As Pope Francis said last year in his Apostolic Exhortation, The Joy of the Gospel: “Inequality is the root of social evil.”

Taxation and spending
In Ireland, a commitment to tackle inequality and to promote social justice needs to underpin the taxation and spending decisions of Budget 2015.  The cumulative impact of successive years of financial hardship for many, of high unemployment and emigration, and of austerity budgets, has been enormously damaging to the social fabric and our commitment to social justice.  As the focus turns to economic recovery, it is vital now to ask ourselves: what kind of recovery do we want?

The true test of recovery will be how we respond to basic needs, ensuring an acceptable standard of living for all and a lessening in inequality across all areas of life, including income distribution, educational opportunity, and access to public services.  It is not sufficient to commit to such change only in principle. The glaring gaps exposed in recent years can only be addressed through the allocation of funding to specific, targeted measures.  Deferring this investment will result in higher social, economic and human costs in the long term.

The increasing number of people having to resort to the services at food banks across the country is the most visible manifestation of this need, but much of this poverty remains hidden, with one child in five going to bed hungry.  Essentially, the problem of food poverty in Ireland reflects the wider problem of income poverty, which has increased significantly since the economic downturn.

Globally, one in eight people in the world live in chronic hunger.  Sub-Saharan Africa remains the region with the highest prevalence of undernourishment, and is heavily dependent on international aid.

Problems with housing in Ireland today
The right to adequate housing is a further essential foundation for greater equality.  In recent times, there has been a truly alarming rise in housing insecurity and homelessness in Ireland, in particular in the major cities.  The family home, which should be central to wellbeing, is for so many at the present time the cause of considerable distress, as people face the prospect of losing their home as a result of unsustainable increases in rent or mortgage repayments that are unaffordable.

The problems with housing in Ireland today are giving rise to not only to anxiety and insecurity, but to poverty, because so much of net income is going on housing costs, and at the extreme to a rise in homelessness, which leaves people trapped in a vicious cycle of exclusion, inhibits access to employment and participation in society.  There is an urgent need for the Government and all political parties to recognise that the current situation constitutes an immediate crisis, requiring priority attention in the forthcoming Budget.

Ending poverty
Ending poverty in all its forms everywhere is key to creating more just societies.  With cuts of just under 35% in our Overseas Development Assistance (ODA) budget since 2008, Ireland’s contribution to addressing fundamental injustices, such as hunger and homelessness, is being compromised.  Progress towards fulfilling the Government’s commitment to contribute 0.7% of national income (GDP) to ODA can start in Budget 2015 by reversing the trend established by the last six budgets, which has seen the allocation falling continuously, from 0.59 % of GNI to 0.43 % in 2014.

The participating organisations in this joint statement are: the Council for Justice and Peace of the Irish Episcopal Conference; the Council for Research & Development of the Irish Episcopal Conference; Crosscare, the social support agency of the Archdiocese of Dublin; the Jesuit Centre for Faith and Justice; the Society of Saint Vincent de Paul; Trócaire, the overseas aid agency of the Catholic Church in Ireland; and, the Vincentian Partnership for Social Justice.