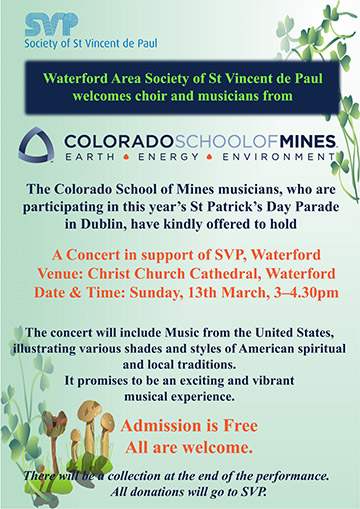 The Colorado School of Mines musicians, who are participating in this year’s St Patrick’s Day March in Dublin, have kindly offered to perform a concert in support of SVP Waterford in Christ Church, Waterford on Sunday, March 13th at 3 – 4.30pm.

The concert will include Music from the United States, epitomizing various shades and styles of American spiritual and local traditions. It promises to be an exciting and vibrant musical experience.

More about the College and its musical tradition.

Colorado School of Mines is an engineering university filled with All-State first rate musicians and musical talent.  Led by Dr. Robert Klimek, and two of his staff, Professors Jonathan Cullison and Maggie Greenwood, these musicians have played international concerts in the Vatican, Jamaica, as well as the shanty towns of Peru.  They not only share their music, but also their engineering talent wherever there is a need.  Klimek is well represented in published Sacred Music.  He is the featured artist on a Grammy nominated sacred music album, a nominee for the Christian Booksellers Award and the producer of an acclaimed Spanish music collection awarded the Independent Broadcasters CD of the month.   He continues to direct chorale music for the Archdiocese of Denver, Colorado, USA, as well as teaching and conducting clinics nationally.  Several of his own compositions and arrangements will be featured at the above performance.

The CSM faculty and students will be joined by Dr. Lorenzo Truijillo and a select group of the Southwest Musicians.  Lorenzo is a specialist in the dance hall and folk music of southern Colorado and Northern New Mexico.  Their selections today will give us a small taste of this region and its rich history which is based both in the Unites States, as well as the mother country of Spain.
Everyone knows the value of SVP work in support of our neighbours in need.  We hope you will come and support this SVP fund-raising project, offered so generously by our American visitors and taking place in Christ Church Cathedral, Waterford on Sunday, March 13th, 3 – 4.30pm.  There will be a retiring collection at the end of the performance.  All welcome.