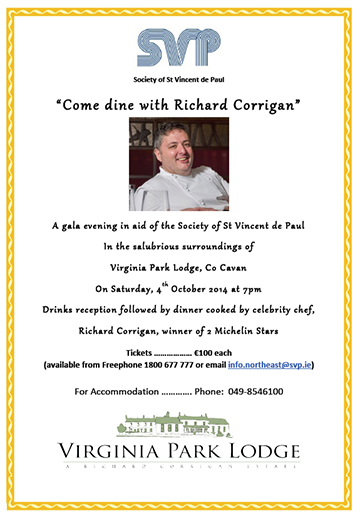 A gala evening in aid of the Society of St Vincent de Paul in the salubrious surroundings of Virginia Park Lodge, Co Cavan on Saturday, 4th October 2014 at 7pm


Richard Corrigan is one of the most established and well known Irish chefs in the UK and beyond.  Richard has cooked all his life and he is a vehement supporter of British and Irish produce and small independent suppliers and the ambassador for the slow food movement.

He has opened numerous restaurants, gained two Michelin stars, is the author of three cook books, wrote the menus for Concorde, cooked for the Queen twice and was crowned winner of The Great British Menu four consecutive times.
Virginia Park Lodge is an 18th Century hunting estate set in 150 acres of beautiful Cavan countryside.  It is a special place for Richard as it is here he married his blushing bride Maria 28 years ago.  Now the proud owner of the Lodge, Richard is collaborating with the Society of St Vincent de Paul, North East & Midlands to host a gala evening in a luxury marquee on the grounds of the Lodge.

Dinner will be cooked by Richard himself in what promises to be an unforgettable evening in aid of one of Ireland’s biggest charities.  St Vincent de Paul is involved in a diverse range of activities and visiting people in need in their homes is the core activity of the Society since it was founded in 1833.

Guests on the evening will experience a culinary feast in the beautiful surroundings of the Lodge while helping a charity to assist those most in need in our communities.