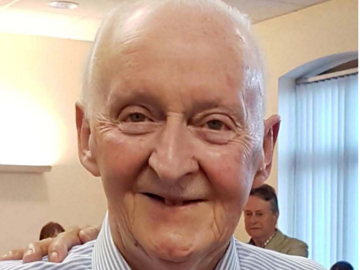 Everyone at the Society of St. Vincent de Paul was so very sad to hear of the passing of revered volunteer, Cormac Wilson, who was a member of SVP for more than 33 years.

Regional Senior Vice President, Cormac, was a driving force within the Society and a powerful engaging presence; respected wherever he went and by all he met and we are poorer without him.

In 2017 Derry man, Cormac, was recognised for his outstanding service to the charity and was awarded an international St. Vincent de Paul medal at a special ceremony led by Father Eddie McGee.  The honour was presented by former Regional President, Aidan Crawford, who organised the event to thank Cormac for his on-going support.

Cormac provided wonderful guidance to all around him and he helped many people over his years with the charity.  As a former Regional President of SVP, Cormac, offered invaluable advice and loyalty to the team.  He had a passion for our charity and those whom we serve, often volunteering around 50-60 hours a week.  During his health battle in his later years, he continued to play an important role at a regional and local level.

Cormac, who hailed from Bishop Street in the City, had seven children with his wife Rosaleen, as well as nine grandchildren and he spent more of his lifetime as part of the Society than out of it. Joining SVP back in 1984 when he was in his early thirties, he started as a member of St Columba’s (Long Tower) Conference. Recognising the level of need within the City, he decided to devote all his spare time to assisting those who needed help.

He began his journey with SVP by carrying out visits to local families in need right across the community, assessing their situation and doing all he could to support them through difficult times by providing very practical items such as coal, food and clothing, or indeed helping them through family issues or debt. His view was that ‘a problem shared is a problem halved’.

In 1993, Cormac was elected as Conference President of St Columba’s and he continued his volunteering alongside his role as a successful driving instructor. Due to ill health and following a triple bypass, Cormac then retired from his driving duties in 1999 and instead of sitting back and taking it easy, he decided to volunteer full-time with SVP.

Once he was aware of how hard some other people have it, he couldn’t just sit back. He devoted all the time he could to help those facing poverty or social exclusion. He was elected President of the entire Derry City area in 2002 and also joined the Magilligan Prison visitation Conference. In addition, he became a trainer within the Society and also worked very closely with the Salvation Army to help co-ordinate the joint Family Appeal.  This important initiative ensured that no child in Northern Ireland had to go without a gift at Christmas.

In 2007, he was elected Regional President of SVP, meaning he had overarching responsibility for the charity right across Northern Ireland, a post he held for five years. During this time he worked closely with SVP in the south, also becoming a member of the National Board of Ireland and the National Management Committee.

He has been involved in every aspect of the Society over the years and this was made possible for him through the support and inspiration from other members. Cormac recognised that as our work is fully funded by donations, it can only be carried out thanks to the kindness of the people right across Northern Ireland.

Cormac was humbled but very honoured to be recognised with his St Vincent de Paul medal. At the time he commented: “When I heard about the ceremony I was very surprised as there are so many dedicated people involved with St Vincent de Paul and while I have been a member for 33 years, believe it or not, there are so many other volunteers that have been with the charity for much longer than that!”

Our thoughts are with Rosaleen, Cormac’s children, grandchildren and the wider family circle at this time.