Every Friday morning in Westside Community Centre a group of women come together for a basketball training session. These sessions are particularly unique as the participants are women from new communities and Irish women – different ages, different nationalities, different levels of fitness and skills but different together!

The sessions are supported by Titans Basketball Club who provide equipment and coaching expertise and the use of the Westside Centre at a reasonable fee.  Croí na Gaillimhe support staff play alongside participants and it provides an opportunity to discuss and plan for the needs of new communities in particular.

Participants have spoken about the impact these sessions have on them, including:

Relieving stress especially for the women living in direct provision centres and those who have transitioned recently to the community.

Increased fitness and awareness of health and wellbeing, and increased coping and resilience mechanisms due to improved physical and mental wellbeing.

“I look forward to coming, I forget everything when I’m playing…it’s just about getting the ball, playing as a team…all the worries are gone for that time”. 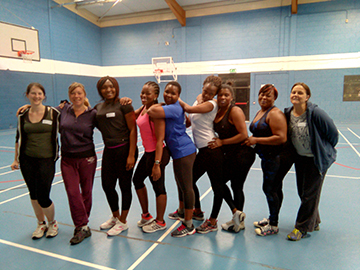 Above all, the participants both those from new communities and the Irish women talk about the social aspect of the sessions.  For the most part these women did not previously know one another nor have the opportunity to interact with one another prior to the development of these sessions.

“The fun is great… we get to know each other in a way you don’t in a more formal setting”.

The development of this special approach to Interculturalism was initially made possible by the SOLAS (2013 – 2015) Project funded under the European Refugee Fund which sought to develop supports for people in the asylum process in Galway and Mayo. Croí na Gaillimhe in partnership with Titans Basketball Club have continued the successful approach established under the SOLAS Project and are planning ways of enhancing the process for the women involved based on the outcomes of the evaluation in December 2015.