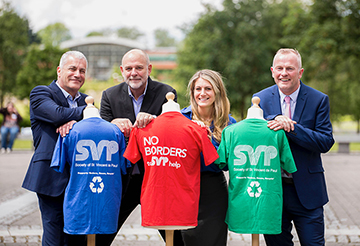 The modern charity shop customer has come to expect exceptional value for money as standard and will now gravitate towards the charity retailer who can also provide an educational and recreational experience that strongly promotes the values and ethos of the charity.

That  is the message delivered today by Dermot McGilloway, National Retail Development Manager for the Society of St Vincent de Paul (SVP)

He was speaking at the Society’s 4th National Retail Conference in University of Limerick on 10 June which was attended by staff and volunteers from the network of 230 Vincent’s shops throughout Ireland.

Mr McGilloway said; “Consumer confidence in Ireland is still very fragile as a direct result of a high personal tax burden, the continued high cost of housing, subdued wage growth and uncertainty over Brexit. The customer wants more for their Euro than ever before. For that reason, the focus of the conference was  on how we deliver even more value and quality to the hard - pressed consumer”.

He noted that the Irish consumer, particularly the millennial generation, enjoy the thrill of the “treasure hunt” in their local charity shop. But he stressed there is plenty of strong competition in this field.The keynote speaker at the SVP conference was Paco Underhill an international bestselling author based in the US whose books on the  psychology of shopping, include “Why We Buy” and “What Women Want - the Science of Female shopping”

Mr Underhill is an environmental psychologist  and the founder of market research and consulting company Envirosell.

He is a worldwide authority on all aspects of retailing from buying behaviour to consumerism in the modern world,  and has been a keynote speaker at conference throughout the world for over three decades.  He told the delegates at the SVP Shops conference that retail is now a reflection of social change. “A good store today is very different to one at the turn of the century”, he said. One of his messages to SVP is that a web presence and use of social media is the engine of repeat business. “People should come to Vincent’s shops because they want to, not because they have to”.

Other speakers included Mark Limby, Stores Director at Brown Thomas who gave an outline of what makes BT attractive to its customers and Robin Osterley Chief Executive of the UK Charity Retail Association who described the development of charity shops across the UK. 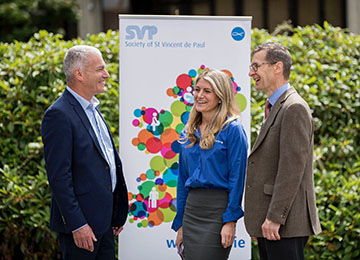 The headline sponsor of the event was: All-Tex Recyclers with support also from EMS & Associates and Retail Integration.

Vincent’s charity shops are a very important aspect of the service SVP provides. Not only do they provide people with new and lightly worn items at affordable prices, they also provide an income source for the Society, which is recycled directly back into the community.

The charity shops are managed by a small number of professionals, assisted by a large number of volunteers and by community employment trainees.

Local SVP Conferences can also provide people with Vincent’s Gift Tokens for clothing and furniture, which they can use in any of the shops. The second-hand clothes and other items donated to Vincent's charity shops make a difference to people in need in their communities.