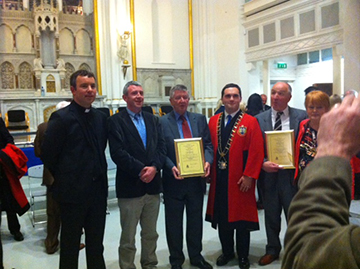 On a warm summers night in Mid May last the great and the good of Drogheda Society gathered in the Highlanes Gallery to honour those whom the Mayor and Councillors of the Drogheda Municipal District felt had made an important contribution to the quality of life in the area.

In all 14 people were honoured - each in their own way had making a difference. SVP was honoured with Drogheda Area President Joe Sweeney who was amongst the recipients.

The Mayor, Councillor Kevin Callan, told the assembled audience that he greatly valued the work of the St. Vincent de Paul Society in the area and said that “they never failed to come to the rescue of people in need”.  He went on to say “they go about their work in a quiet and helpful manner always respecting the privacy and the dignity of those whom they help”. In presenting this award to Joe Sweeney, the Mayor was in essence recognising the unseen work of all the members who gave so generously of their time.

In reply Joe thanked the Mayor for the great honour and thanked the members of the Municipal District for being such good supporters of SVP and hoped this good relationship would always endure.

Joe stated that he was merely the public face of this Society and were it not for an extremely dedicated and motivated team we could not deliver the help we are administrating.  “We strive to ensure that anyone who has fallen on hard times is not left without help, to this end the volunteers and staff in our growing network of Vincent’s shops and our staff in the Regional Office are all very committed.  It is only through partnership and aiming for a common goal that our efforts will bear fruit”.

Joe went on to single out for special recognition, former Drogheda Area President Michael Grogan and Area Treasurer Pat Heeney, without whose trojan work and dedication SVP would not be nearly as successful at responding to those in need.

Finally Joe dedicated the award to Pat Curran who died in the early hours of that morning. “Pat represented all that was good about our society. A most compassionate and caring man who always saw the good in people.  As Spiritual Director, for the Drogheda Area Council, Pat kept reminding us of the importance of prayer and sacrament in our lives” said Joe.

All in all it was a most pleasant and moving evening and showed that the work of our Society was greatly appreciated by the civic leaders of our community.

Thank you all again for your support.