A cheque for €440 was presented to St. Nicolas Conference of St. Vincent de Paul members, Michael Lonergan, President and Marian Grace, Treasurer on 1st April by the Young St. Vincent de Paul group of students at the Edmund Rice Secondary School in Carrick-on-Suir.

The funds raised by Young St. Vincent de Paul group (2nd to 6th year students), were sourced through sponsorship of a ‘Readathon’ held in February organised by the 2nd years students and €350 was collected. Books were also sold at the school on World Book Day 7th March raising an extra €90.

The St. Vincent de Paul team at the school, affiliated to Mid-Western Region, liaise with Ivanna Kolic, Youth Development Officer based in Limerick and recently enjoyed a visit to Ennis to link up with other Young St. Vincent de Paul members from St. Flannan’s College. 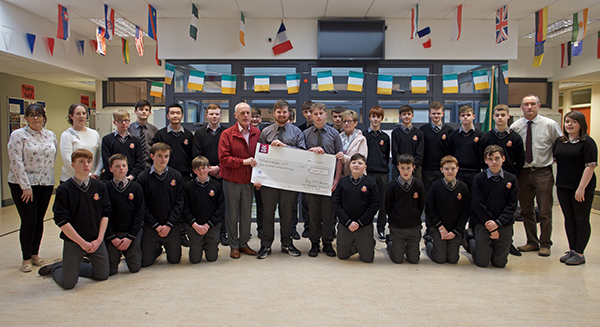 They also attend the Day Care Centre at St. Brigid’s Hospital in Carrick on Tuesdays to help out with activities for the older people. President Michael Lonergan thanked the group for their kind donation and for all the work they carry out to support St. Nicholas Conference of St. Vincent de Paul. He spoke of the outstanding contribution the school had made towards the Christmas Food Appeal, which helped in the make up of 75 hampers distributed to families locally. All funds raised he said was spent locally and put back into the community. Michael also thanked and acknowledged school Principal Mick Walsh and the teachers Ms Tracy Murray, Social Justice Committee, Ms Linda Barry and Ms.Leona Mulcahy Young St. Vincent de Paul Committee.

Principal Mick Walsh also thanked and praised the groups, “Well done and bring that spirit with you when you leave,” he said. The Young St. Vincent de Paul group and the Social Justice Committee group in Edmund Rice Secondary School work closely together helping the community through many initiatives and fundraising activities and promote fairness and justice for all in a respectful environment".