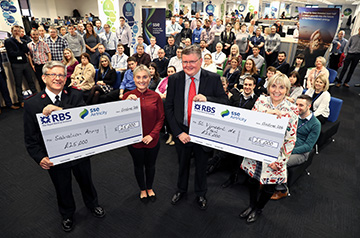 Northern Ireland’s second largest electricity provider, SSE Airtricity has again shown its commitment to helping those in need with a £50,000 donation to The Salvation Army and The Society of St Vincent de Paul (SVP). This is the second successive year SSE Airtricity has made the same contribution to the two organisations; in recognition of the work they do alleviating the effects of poverty throughout Northern Ireland.

Representatives of The Salvation Army and SVP paid a visit to SSE Airtricity’s Belfast headquarters today to meet staff and outline precisely why the funds are needed and where they will be spent.

Andrew said, “SSE is dedicated to supporting the local communities in which we operate. That doesn't just mean the areas surrounding our windfarms where we are indeed very active, but right across Northern Ireland. We partnered both The Salvation Army and The Society of St Vincent De Paul last year and we were struck by both the extent of the need, which exists out there, and by the tremendous work both organisations are doing to relieve the effects of poverty and ensure that families can experience and enjoy Christmas.

“I am especially pleased that both organisations spent time with us today describing precisely why donations like this are so necessary. Our colleagues like myself appreciate that and we wish the Salvation Army and SVP every success in their efforts over this Christmas period.” 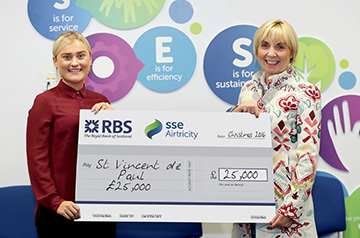 Pauline Brown, Regional manager for SVP said:
"We work to alleviate poverty in our society by providing practical and emotional support to people when they need it most. Sadly demand for our services continues to rise in Northern Ireland, especially over Christmas and the New Year when more and more families and individuals find themselves in severe financial hardship.

“As a volunteer-led charity that relies entirely on donations, we simply could not function without the support from the public and businesses, such as SSE, who continue to be so generous. We are so very grateful and would like to extend our thanks to all at SSE for helping to make Christmas and beyond a happier time for some of the most vulnerable in our society.”

Major Elwyn Harries, leader of The Salvation Army in Ireland, added:   “We are delighted with SSE Airtricity’s incredible and continued support for the Family Appeal. This generous donation will make a huge difference to the lives of so many people across Northern Ireland this Christmas."