Helping People after the Limerick Floods 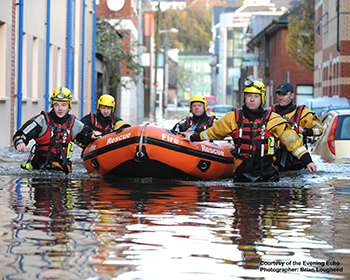 Helping People after the Limerick Floods: The Experience of our Regional President, Michael Murphy.

From the 1st of February this year Limerick City was hit with unprecedented floods, causing untold damage to hundreds of homes across the City.

After Mass on the 2nd of February, Canon O'Malley and I set out to visit the local Star Rovers clubhouse, which enterprising residents had already set up as a distribution service for food, water and clothing. When we reached the clubhouse the extent of the damage and devastation became apparent. The only way into and out of the area was by Army truck, and some Aid Centres, such as St Mary’s, were completely inaccessible.

The stories I heard from families were heart rendering. Some parents had split their families, sending children to relatives in other parts of the city while remaining in their homes.  Their ‘white goods’ were flood damaged and had to be destroyed so they were unable to cook or wash their clothes. Many had been in these homes since the late 1930s and their children and grandchildren continued to live here. Most people were adamant that they did not wish to relocate from the area where they had grown up and lived.

Despite the devastation, the most abiding memory for me is the resilience of the people and families affected. Everyone we spoke to, while confirming they had suffered flooding, quickly said they were reasonably alright but asked that we look after people they felt were worst affected. The sense of community spirit was tremendous to witness and there was no air of gloom and despondency - locals had taken action to help their neighbours; particularly older, frailer people.

On Monday the 3rd of February I returned to the area. The smell of flood damage was inescapable and streets were strewn with household furniture, fittings and personnel effects which the local authority had advised householders to remove due to danger of contamination and disease from the flood waters.

From my contact with Government and other voluntary agencies (such as the Department of Social Protection, Limerick City Council and the Irish Red Cross), it became obvious that the best assistance we could provide was the provision of fuel, foodstuffs, replacement clothing and bedding and helping residents to wash their clothes – by arranging with a local laundry to carry out the clothes washing for residents who sought our assistance.

As I visited the streets last week, I was pleased to see a lot of building repairs being carried out and the hum of dehumidifiers drying out the damp homes. I was delighted to be shown around a refurbished house by a proud tenant who was awaiting the delivery of her new furniture.

It will be some months before every resident will be able to resume their normal lives - whether in their own homes or in a new home. But in the meantime SVP continues to work with residents who seek our assistance. Thanks to all who have supported SVP during this very challenging time for flood affected families and for the support we have received from fellow SVP members throughout the country and from parish groups as far away as Fintona, County Tyrone, from whom we received a transit van full of clothing and bedclothes.

In spite of all of the challenges, it is the actions of the residents themselves which has given me hope that the devastation will be overcome.