How Ireland changed between papal visits

If there is a book guaranteed to cause a row in the most sedate of book clubs The Renaissance Nation by David McWilliams is it.

McWilliams is an economist but one who approaches economics with a jaundiced eye. He once said that “Women are too clever for economics and by that I mean they realise the economic models that most [male] economists work off do not reflect their day-to-day life.” 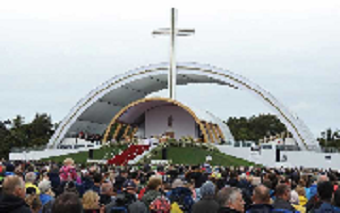 He tells a story in Renaissance Nation about being in Kiev working for a French bank, and his task was to find out what was going on in Russia and the `Ukraine. Having met the IMF, the World Bank and various EU delegations along with consultants and other bottom-feeders (not a complimentary term) he says “It struck me that these rarified bureaucrats hadn’t a rashers what was going on in the place. They were typical economists; removed distant and naïve. You wouldn’t give them a post office account back home.”

He says that he learned more from a barman in a Kitty O’Shea’s pub in Kiev, who was a mine of information about the local economy and the running of a cash business.

McWilliam’s writing style is designed to be controversial telling a story through the eyes of characters that he applies exotic names to. In his earlier book The Pope’s Children, a book about the Celtic Tiger he introduced us to Breakfast Roll Man. In Renaissance Nation, we meet Sliotar Mom, the Exam Whisperer and visit Applegreen Land.

But there is a very serious side to this book and one of the chapters that will particularly interest SVP members who visit those who don’t benefit from the improvements in our economy is the one he calls the Wealth Divide. There is evidence says McWilliams that Irish people generally think that the wealth gap in Ireland is bad “but unfortunately it’s far worse than they think,” he says.

Wealth inequality, he makes a clear distinction between income and wealth, is not just confined to Ireland and is the issue of our time he says. “The reality is that the richest 20% in Ireland own 73% of the country’s wealth while the bottom 20% (over 1.5million people, own a measly 0.2% of Ireland’s wealth.”

In Ireland 87cents of every euro of all the wealth of the richest people in the country is held in land, property and houses. He says that once wealth inequality at this level becomes accepted, it’s not only those at the bottom but also those in the middle who feel that they might slip back and lose hope.

In that time Ireland has jumped from being the 42nd richest country in the world to being in the top ten today.

The heroes in this book are what McWilliams terms The Radical Centre. These he says are the everyday people who are slow to judge others, who live by their own set of civilized rules, who return lost wallets or mislaid bikes, who pick up their dog’s poo in bags and deposit it in a municipal bin, who do the accounts for the local GAA club (he could have added SVP and a multiple of charities and organizations) and who take it upon themselves to start a small business.

These are the common people who, through their tolerance, respect those around them. The can be found in the background, beavering away, and are driven by the expectation that tomorrow will be a little bit better than today, and therefore worth getting up for.

This relentless effort put in every day in every small town, every suburb and village in the country without the need for acclamation or bragging is the dynamo of the economic miracle.

However, he warns there is a danger because too few own too much the radical centre will shift to the radical left or the radical right.

Not everyone will like this book. It is provocative, and challenges accepted social, religious and economic dogmas. But it is essential reading if you want to understand what has been happening to bring about so much economic and social change.