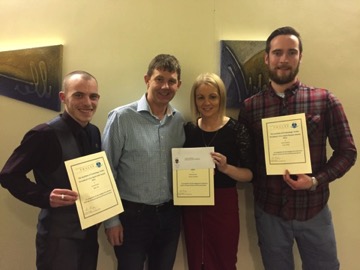 This award has been established to recognise and acknowledge the significant time input by I.T.Tralee students to volunteering in the Institute and in the wider community.

Engaging with one’s community as a volunteer brings a reciprocal benefit to both student and community, this award seeks to encourage student community engagement, active citizenship and build on the established work that is being carried out. All students who submit their work will be awarded an ITT President’s Civic Spirit citation. A gold, silver and bronze award will be bestowed on 3 candidates displaying outstanding volunteering experience and impact as adjudged by the award selection panel.

Three members of the SVP Society have been awarded with the Presidents Civic award for all their hard work and efforts within the SVP Society. The members have been working on numerous fundraising events such as the Fashion show which they were held for the last few years which has been a great success. These students organise and volunteer their time with SVP while still studying and attending college. The dedication is bestowed to them and more of a reason why they were awarded the Presidents Civic Award. Students who submit their work will be awarded an ITT President’s Civic Spirit citation. An award will be bestowed on the three candidates who display the most outstanding volunteering experience and impact as adjudged by the award selection panel.