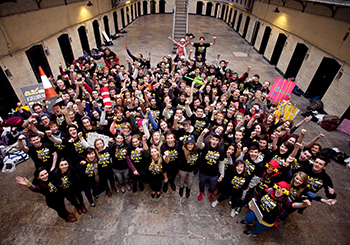 The winners of Jailbreak 2014 are Kyryll and Salim, Team 15 from Trinity College Dublin who got as far as Sydney, Australia while second place went to Sean & Aoife, Team 2 from NUIG who are currently relaxing in sunny Bali.

Well done to all involved you were absolutely amazing. Thanks from all at St Vincent de Paul. The combined total of miles travelled was over 186 thousand miles & over €33,000 has been raised for St Vincent de Paul & Amnesty International.

Well it's Sunday & several of us stayed in HQ all night so cabin fever should be hitting shortly.... who needs fresh air?

The map is looking nice and spread out now. Our furthest team is in Singapore as we speak waiting on a connection to Sydney and to keep things interesting our team in Abu Dhabi is also heading to Sydney soo expect a foot race tonight!

HQ has also been told that our team in San Diego has swung some flights to Hawaii, not too shabby. The rat is still gallivanting about and is yet to be caught. We think 4 teams are close so we're eagerly awaiting the result.

In terms of other teams there are a ton bargaining in airports and looking for flights & Europe is saturated with fugitives of all kinds. We even have a team skiing in the Alps!! Not too bad for Day 2!

Things are hotting up in the #jailbreak14. We've had..... a snapchat from the cockpit of a plane with our team in wedding dresses! 2 teams have just landed in Istanbul and 1 team in Prague! Hq is ripe with rumours and speculation there's a team in Frankfurt looking for connections and there's rumours of people in JFK looking for a flight to Hawaii! Also 3 teams have boarded the ferry from Rosslare heading for the sunny shores of France! Closer to home we've a few teams still buzzin about Dublin one team have donned boiler suits getting donations in exchange for the chance to paint them! Please please donate if you can & help teams to reach their destination! Teams listed on jailbreak14.com with links to donate.

The leader as it stands!

A ton of teams are in the air as we speak so the race is still wiiiide open! We've had a few celebrity meet-ups keeping with the rugby theme we've met Ronan O'Gara and another team have managed to get tickets for the Ireland England match later on today! Also we've met Richard Ayoade from the IT Crowd and Gaz from Geordie shore so Jailbreak has reached celebrity status 😉

3 teams are currently  on the same flight to Amsterdam and we've teams jet setting all over as far wide as Chicago, Orlando, JFK and alllll over Europe.

Our website is http://jailbreak14.com/ where we've got the live map up and running so anyone can see where our wondrous teams are! The Facebook and twitter are buzzing as well https://twitter.com/TCDJailbreak,
https://twitter.com/UCDJailbreak and Trinity fm are covering the whole thing!

AAAAAnd the rat is still yet to be found!