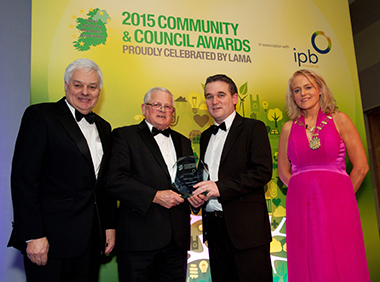 
The Winners for the 2015 LAMA Community & Council Awards in association with IPB have been announced. Celebrating community and councils working together, these awards have grown in popularity nationwide since their inception in 2006. By expanding and developing annually, the awards reflect the changes in contemporary society.

This year has been successful for Cork by winning the Community Volunteer of the Year Award, presented to Brendan Dempsey, of St Vincent de Paul, Cork. The Special Merit Award was won by John Looney from Cork City Hospital Children's Club, and The National Impact Award, sponsored by Ireland West Airport Knock, for The Wild Atlantic Way.

“As the proud insurer of the local authorities, IPB Insurance is delighted to continue our long-standing support of the LAMA Awards. Now in its 9th year, the LAMA Community and Council Awards provide an invaluable platform to recognise and celebrate those communities and councils who are working together to deliver excellence in development and recreational projects. This event affords us all a unique opportunity to pause and say thank you to the people whose tireless work on quality local projects makes such a meaningful difference across the country.”

“It is great to see so many innovative and unique projects being recognised and congratulations to all who have reached the final. The LAMA awards are distinctive in that they celebrate councils and communities working together, every year I am amazed at the wonderful work being carried out across the nations.  We are also delighted to be partnering once again with IPB, this is the 5th year of the partnership which has grown from strength to strength.”

This year’s LAMA Community & Council Award winners were announced at the gala Awards ceremony, hosted by the wonderful Miriam O’Callaghan at the Crown Plaza Hotel, Northwood, on the Saturday the 24th of January 2015. A full list of winners is available at www.lamaawards.org