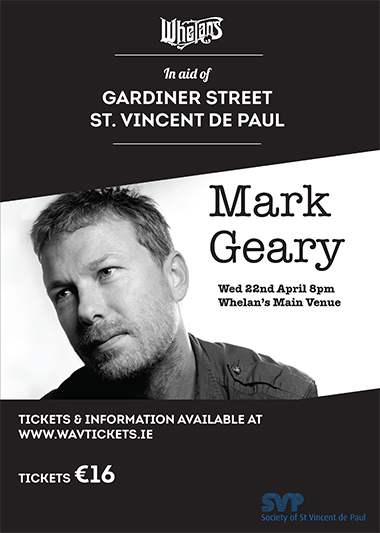 In November of 2013, Mark Geary collaborated with Glen Hansard on a new version of his song Christmas Biscuits as a charity single for SVP. The song hit the Top 40 and was made the song of the week on Today FM, Ireland’s largest commercial radio station and is available to purchase on iTunes.

Well Mark is kindly going to play a special gig on April 22nd 2015 in Whelanslive for one night with his band with all the profits going to Society of St. Vincent de Paul - Gardiner Street

Mark is a Dublin born musician who has split his time between Ireland and New York City over the last 20 years. He spent his early years performing in NYC at the famed Sin-e Café alongside other up and coming musicians, including friend Jeff Buckley, garnering respect and attention from both audiences and fellow artists.