65 Years of Service to others 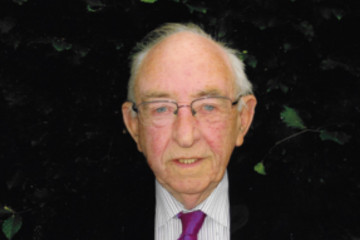 In late 1953, a young man by the name of Michael Wall joined the Society school Conference at Colaiste Mhuire, Parnell Square, Dublin 1. The Conference visited families living in tenements in Maryborough and Sean McDermot Street.

After leaving school two years later, Michael was invited by Michael Kelly to join St Gaul’s Parish Conference in Milltown. Together both Michael’s along with others (all men) set up the Conference of St Christopher on 5th February 1961, up to this time all members of the Society were male. At this stage, Michael Wall was elected Conference secretary, and their duties involved visiting male patients in several hospitals including St Mary’s, Phoenix Park, St Vincent’s on the green, Hume Street and St Ann’s on Northbrook Road.

In 1982 he became a founder member of the parish Conference St Attracta’s, Meadowbrook, Dundrum and was later elected as President in 1983 and again in 2015 where he remains Conference President and an active member.

Michael served as Area President for South Dublin in 1985, now known as Rathdown Area Council and arranged for the meetings to be held at St John of God’s hospital where he was an employee.

In 1989 Michael played a leading role in setting up Fred’s Fashions charity shop now Vincent’s in Dundrum and with Michael’s encouragement a shops council was set up by the Dublin Regional Council in 1991. From there he was appointed Director of Services by the Shop Council in 1993 to take charge of the Clothing and Salvage Bureau then located at Ozanam House on Mountjoy Square and over the next ten years further developed the shops and opened up a number of Fred’s Fashion shops around Dublin. Michael retired from that position in 2003 having made tremendous progress in growing revenue through the charity shops for the Society.

During his role as Director of Services, Michael noted that Ozanam House had become not fit for purpose for carrying out the shops work so made a proposal to the shops council that a more suitable premises be sought and in 1996 acquired a large garage premises at Chapelizod to rent from the Linder’s family to house their furniture department.  “A fortuitous move” states Michael. Jane Bergin who was his assistant at the time knew that they were looking for a new premise and suggested that they look at Eason’s warehouses, which were for sale at Sean McDermot Street/Railway Street, Corporation Street, a large city block. A proposal was drafted to purchase the Eason’s building and submitted to the shops' council and property committee which was accepted and on November 8th, 1997 the new facility was opened by then Taoiseach Mr Bertie Ahern and blessed by Bishop Fiachra O Ceallaigh. This premise became known as the Ozanam Centre.

The 1990’s saw a major focus on the redevelopment of the North inner city by Dublin City Council. The Linder’s family mentioned previously had developed a large block on the corner of Talbot Street and James Joyce Street (formally Corporation Street). They also owned a derelict site on James Joyce Street/Railway Street, which they intended to rebuild. The Society of St Vincent de Paul owned the last block of property and Michael proposed the rebuilding of the Ozanam Centre to the SVP property committee with the approval of the Dublin shops council.

Larry Tuomey now chairman of the property committee sought expression of interest from developers in the project. The plans were forwarded to the developers, and finally, the project was awarded to a company owned by the Linders Family. After agreement Linders cleared the site and built a block of apartments and a new building for SVP to become known as SVP House on Sean McDermot Street and it is now the offices and warehouse of the Dublin shops Council, the offices of the East region and national headquarters of the Society of St Vincent de Paul in Ireland.

As a dedicated member of the Society, one memory that stands out for Michael and a considerable honour was to attend the beatification of Blessed Frederic Ozanam by Pope John Paul II at Notre Dame Cathedral, Paris in 1997.

It seems Michael’s service to those in need seems endless. “On my behalf, I have had great satisfaction with my membership of the Society of St Vincent de Paul, and it seems one could say I was in the right place at the right time”, laughs Michael. He retired as Director of Services with the Dublin shops council on his 65th birthday on 13th June 2003 with the opening of a new shop in Blessington, Co. Wicklow and received his Blessed Frederic Medal (50 years long service) that same year.